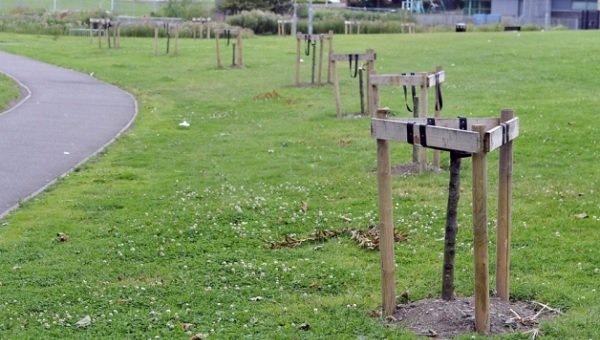 Vandals destroyed an avenue of young trees, callously snapping them in half at their trunks.

The 10 trees were planted at the Lido in Stenhousemuir last year by Falkirk Council’s estates department, but last week shocked and disgusted residents awoke to find all except one had been ruined.

Local councillor Charles MacDonald said he had received numerous calls from residents angry about the damage.

He said: “This is just mindless vandalism and it sickens me to think people would behave in this way. The Lido is a lovely spot and a lot of work has been done in recent years, by both the council and the local community, to make it a beautiful place to relax.

“I’m disgusted someone would do this, it’s a waste of council resources. I’ve been assured the council will replace them, but people need to know there isn’t a bottomless pit of council money that can pay for this.”

Falkirk Council this week confirmed the trees were too badly damaged and will need to be removed.

Local residents have raised concerns in recent months over teenagers using the Lido area to congregate and indulge in anti-social behaviour. Social media has been crammed with comments about the tree vandalism.

Karen Compton said: “Money should be spent where it is needed. Get CCTV installed at the park and catch these delinquents.

“Give them community service and make them plant trees everywhere.”

Kirsten Hunter agreed CCTV was needed in the area.

She said: “I took the kids to the playpark last Monday morning and some idiot had poured cola all down the slide and left food everywhere. What kind of people do that to a children’s park?”

Gillian Russell said: “What an absolute disgrace that someone would see fit to do such a terrible thing. Even more disappointing when you see so many children at local schools taking part in environmental projects in the area to make things better, then all it takes is one or two bad ones to give all the kids a bad name.”

And James Kelly added: “When they replace the trees, they should leave a place for a set of stocks for the culprits if they find them.”