Trees in Huntingdon park left to die after bark stripped off 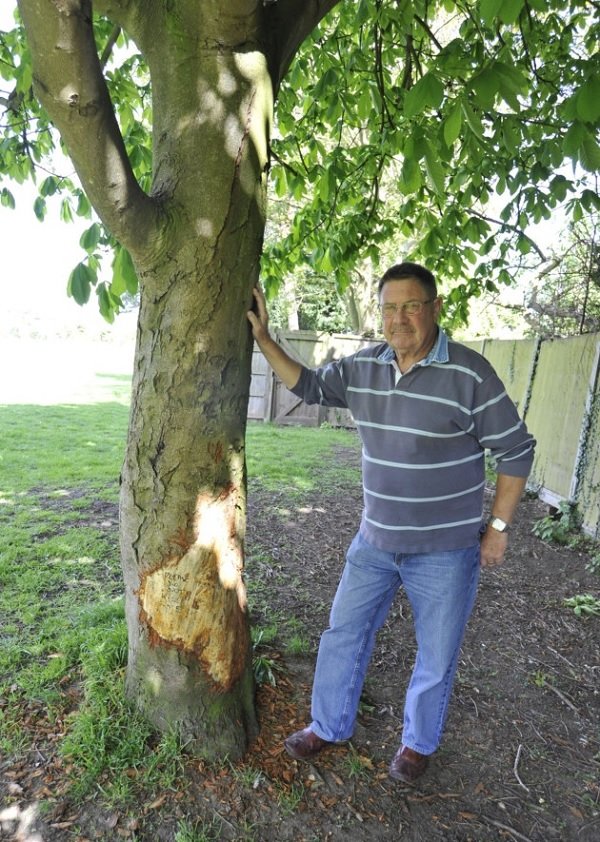 Two horse chestnuts and a damson are unlikely to survive after several feet of bark has been hacked away and left in piles at the base of the trees in French’s Field, Hartford.

The damage was discovered by retired security manager Keith Goodman who walks his dog in the park, which is behind the Olympic Gym. The 72-year-old, who lives in Hartford Road, said he noticed the damage about three months ago and was dismayed to see other trees had been attacked in the same way in recent weeks.

“It looked like the bark on the damson tree had been hacked away with an axe or something similar, and it’s all the way round, so this tree is unlikely to survive as the white bark has now gone brown.”

Mr Goodman was walking in the park, with his wife Jenny, two weeks ago and noticed the same thing has been done to two horse chestnuts.

“I don’t think this is something that could be done easily, so someone has gone to a lot of trouble. The bark has been left in a heap at the bottom of the trees so it’s not as if someone has a purpose, or is using the bark for something. It is such a shame; Huntingdon has some really pleasant parks and to see this kind of damage, which seems to have no logic, is upsetting.”

Huntingdon Town Council said it will investigate after The Hunts Post made it aware of the damage.

Deputy town clerk David Jameson said: “We are investigating the damage to the trees in question and should we find any acts of vandalism these will be reported to the police.”