Trees in historic village to be chopped down in controversial move 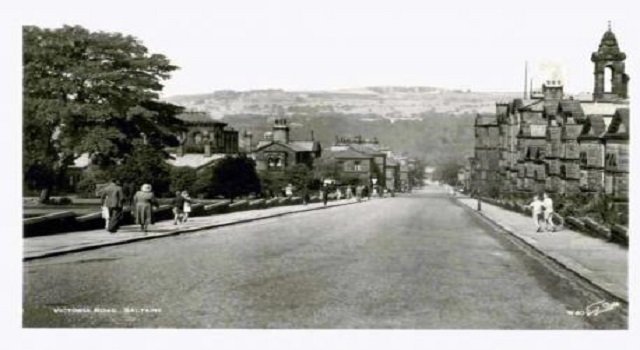 Trees which line an historic street in the village of Saltaire are to be cut down as part of £700,000 plans to make the area safer and more attractive to visitors by creating a centrepiece.

But the idea has been slammed by Shipley MP Philip Davies, who said it was drastic and their axing would be a “massive loss” to the World Heritage Site.

People living and working in Saltaire were told about the Council’s plans for Victoria Road earlier this year.

Now the results have been crunched andCouncillor Val Slater, the Council’s portfolio holder for housing, planning and transport, said option one received the most support – with 40 per cent of people who responded, or 79 people, backing it.

Council officers are currently looking at how many of the 30-plus trees will come down and how feasible it might be to replace some with other species which would not damage the pavement.
“Residents felt the trees were too big for the street and made it difficult for people with pushchairs or wheelchairs to pass,” Cllr Slater said.

Other people said the trees blocked light to their homes.

The plan is to repair pavements, recycling existing stone where possible, along with new Yorkshire stone.

The trees, a mixture of Horse Chestnut, Copper Beech, Norway Maple and Rowan, were planted in the 1950s and Coun Slater hopes their removal will open up the street, as it used to be.
“It’s a bit like taking it back to how it was, but with a contemporary twist because it’s not a museum – we’ve got to think about the future,” Cllr Slater said.

The work will be phased over two years, starting near Victoria Hall, to create a centrepiece for the village by working with creative groups.

“For me, the exciting bit is around how we can do something quite creative and innovative with the lighting,” Cllr Slater said.

In 2009 plans to cut down trees in Saltaire met with a 307 name petition and the condemnation of Lord Wallace of Saltaire and Mr Davies.

Last year four trees were removed at Victoria Road and Saltaire Road following the death of a motorcyclist at the junction whose view was thought to have been obscured by them.

Mr Davies said the latest suggestion to cut the trees down was a bad one.
“I disagree with it,” he said.

“Saltaire is a World Heritage Site and Victoria Road is the gateway really for that World Heritage Site. It seems to me that taking the trees down would be a massive loss for the look of the area – they’re an incredibly attractive feature and I just think it’s a rather drastic option.”

The Tory MP said there was no perfect solution to the damage the trees caused to pavements, but said their benefit outweighed the “down side”.

“I think removing the trees from Victoria Road will have a negative impact on the look and feel of the village,” he added.

Cllr Slater said she was aware that some people would not be happy with the loss of trees.
“But sometimes we’ve got to make unpopular decisions,” she added.

“These things are very emotive and people need to look at the reasons for it, rather than just make a knee-jerk reaction.”

The scheme forms part of a new management plan currently being developed for Saltaire, which is required every ten years as part of the UNESCO World Heritage status.