Trees in Hard Landscape – A Guide for Delivery 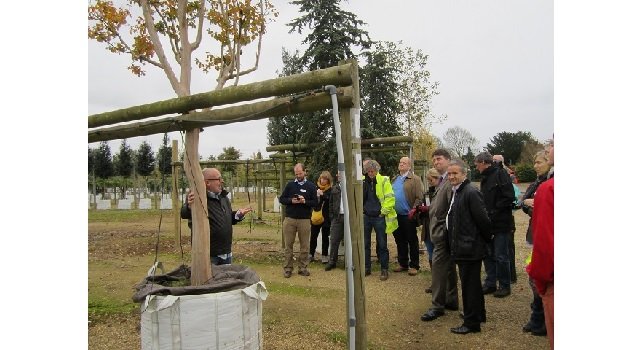 A wide range of professions and disciplines, including landscapers, developers, house builders, utilities, highway engineers, architects and tree officers, was represented at a seminar staged by the Trees and Design Action Group (TDAG) at the Cambridgeshire nursery of Barcham Trees in late October.  The purpose was to provide an insight into its latest publication Trees in Hard Landscapes- A Guide for Delivery.

The Trees and Design Action Group, of which Barcham’s Keith Sacre is a trustee, is a pioneering group of individuals, professionals and organisations from private and public sectors who wish to increase awareness of the rôle of trees in the built environment.  It shares a collective vision that the location of trees, and the benefits they bring, can be secured for the future by influencing the planning, design, construction and management of our urban infrastructure and spaces.  A registered charity, TDAG was set up in 2007, and is both not-for-profit and apolitical.  Membership is free, and more details may be found by logging on at www.tdag.org.uk

Sue James, a founding member and coordinator of TDAG, set the scene for the day by saying the group was established with a view to the future.  Its first two published documents No Trees, No Future and Trees in the Townscape, were aimed at planners and associated professions as guides for decision makers.  Trees in Hard Landscape shows them how to do it.

Anne Jaluzot, a London-based green infrastructure planning consultant then gave delegates a tour of the document.  TDAG invited her to undertake the research for Trees in Hard Landscape and to guide its writing.  In the course of this research she conducted lengthy interviews with more than 120 practitioners from a wide range of backgrounds and developed 60 documented case studies, 32 of which are included in the document.

Trees in Hard Landscape is divided into four sections – Collaborative Process, Designing with Trees, Technical Design Solutions and Species Selection Criteria.  Each begins with a diagram of an imaginary townscape, and there are summaries to the sub-sections, asking the questions what is to be done and who is to do it?

In the next session, Sue James asked the audience to work for a few minutes in groups of three to discuss what are the main blocks to and opportunities for using trees to best advantage in hard landscape projects.  Many lively discussions ensued before a spokesperson from each group was asked to reveal their views.  Several blocks were raised, often from more than one group.  These included the need for a better working relationship with utilities, the number of different utilities which have to be dealt with in London, and a lack of political support when it comes to financing.  A reluctance to invest in innovative engineering and design, the fact landscaping tends to come at the end of the construction sequence and therefore loses out financially, parking spaces coming before trees and the ongoing maintenance required for trees were also seen as barriers.

On the positive side, an early buy-in from all stakeholders and working with clients who have real vision was seen as very important.  One delegate commented TDAG itself was a strength – a point appreciated by Sue James.  The generally positive public perception of trees and the need to train young people to value them were seen as opportunities, as was the point that trees can increase house prices for vendors.

This was followed by a brief presentation from John Onslow, head of Infrastructure Management and Operations at Cambridge Coty Council.  While trees are part of our way of life, there are those who perceive them as a problem, warned John.  He stressed the need for trees to be seen as an asset, but he cautioned delegates that while there is very little money available at present, it is important to make the most of the resources we have.

Our morning session drew to a close with a tour of Barcham’s nursery led by Peter Thurman, who has firm and entertaining views on what makes a good street tree.  He began by warning us against the native tree ‘taliban’, saying there is nothing wrong with planting foreign species, especially as they provide diversity in the face of threats from an ever-increasing number of pests and diseases.  In reply to a question on provenance, Barcham’s Keith Sacre commented he felt that where trees come from in nature is more important than their provenance.

This was not the flippant remark it may at first have appeared to be.  Barcham Trees takes its duty to its customers and to the whole issue of bio-security very seriously.  Peter reminded us Barcham does not import and sell trees to customers for immediate planting into the British landscape.  All imported trees are held on the Ely nursery for a full growing season, during which time they are subject to rigorous inspection for pest and disease, including systematic and regular DEFRA visits.  In addition, more than 15,000 trees across the entire species range are annually, randomly and independently examined for physiological health using leaf fluorescence, chlorophyll content and cell electrolyte leakage.

As the tour progressed, Peter pointed out some of his favourite – and not so favourite trees.  He particularly likes Lagerstroemia, remarking it makes a good street tree and will tolerate temperatures down to -20°C, and Quercus palustris, which tolerates drought despites its specific name and is not affected by oak processionary moth.  Cercis siliquastrum was another of Peter’s recommendations as a street tree which does not become too big.   He also likes hollies, and especially Ilex castaneifolia, partly because they are generally pest- and disease-free.

Prunus x subhirtella Autumnalis, the autumn cherry, received short shrift from Peter – “a poor tree in every respect” was his dismissive comment.  He also counselled about the over-use of variegated and purple-leaved trees, with the latter prone to look like black holes in certain lights.  “Let green be god”, he remarked.

After lunch and back in the lecture room, a quick poll of delegates revealed very few are members of TDAG.  Keith Sacre reminded us that membership is free and directed us to its website www.tdag.org.uk   It was left to Jeremy Barrell to fill the unenviable slot immediately after lunch, when audience attention is often low.  His presentation on the case study of the landscaping of the Bomber Command Memorial at Hyde Park Corner, in which he was closely involved, was nothing less than absorbing, and we could all sense the personal satisfaction he felt with the project.

The in-depth look at the challenges, pitfalls and eventual success of a national and international project which was to be opened by HM the Queen revealed the ups and downs of teamwork, and showed how crucial on-site arboricultural supervision is.

Jeremy then looked at the collaborative process, to which a section of Trees in Hard Landscapes is devoted.  “Traditional team working often involves various people pulling in different directions in an attempt to become dominant.  To begin with, they sometimes hardly even want to talk to each other.  There is very little discussion between disciplines, and you end up with a project which does not fit together quite right.  A disjointed approach is a disaster”, he told us.

The alternative is that brighter people collaborate.  They all meet together at the beginning of a project;  this can cost quite a lot of money to begin with, but the final benefits are huge.  “Invest up-front to save money at the end of a project”, was Jeremy’s advice.  Projects also need leadership, vision and to be driven by someone with a sense of legacy.  He quoted Mayor Michael Bloomberg and New York City as a good example of this approach. “Bloomberg ensured people worked together on the city’s green infrastructure because he had both leadership and a vision”, concluded Jeremy Barrell.

The day gave an invaluable insight into the work and aims of the Trees and Design Action Group and its excellent and thoroughly researched Trees in Hard Landscapes, A Guide to Delivery.