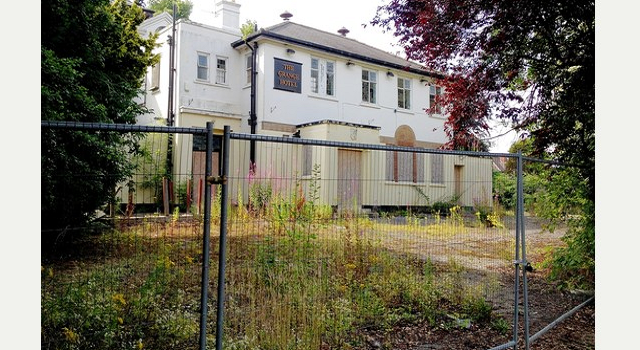 A FORMER pub in Derby that has been a target for thieves could be demolished and replaced by homes in a controversial scheme.

The Grange Hotel, in Ingleby Avenue, Normanton, has been derelict for more than three years and people living nearby say they want something done with the site.

But some residents are objecting to the plans for 14 houses from developer Chevin Homes because trees would have to be cut down.

And one neighbour to the site said she would rather see the formerly grand building renovated.

The site has been a hot-spot for vandalism, fly-tipping, and drug-dealing in the past. It has also attracted metal thieves.

Janet Tristam, 55, of Ingleby Avenue, said trees around the site created a “lovely rural setting” and losing them would be a “real loss of amenity”.

She said: “It’s a beautiful building which ought to be restored to its former glory and become an old people’s home or flats.”

Michael Wetton, 57, also of Ingleby Avenue, said police had been called the site on “numerous occasions”.

He said: “Initially, they were people going on to steal lead and metals but there’s also been anti-social behaviour on there.

“Something needs to be done with the site but I’m not happy that they’ll take down some of the trees.”

The developer’s planning application says that 19 trees on the site have tree preservation orders on them. This gives them extra protection “if their removal is likely to have a significant impact on the local environment and its enjoyment by the public”.

But 11 of them would need to come down under the current plans.

Dan Stack, Chevin Homes director, said many of the trees on the site were in a “very poor state of repair”.

He said: “A lot of people want to see something done with the site because it’s an eyesore.

“We want to make a feature of two primary pockets of trees on the site and develop the houses around them.

“We’ve designed the site to create two cul-de-sacs around these pockets.”

Mr Stack added that the building was in a “poor state” and that it would not be “particularly viable” to refurbish and convert it.

He said that, if permission was granted, work could start at the end of this year.

A decision on the application is set to be made by October 10.