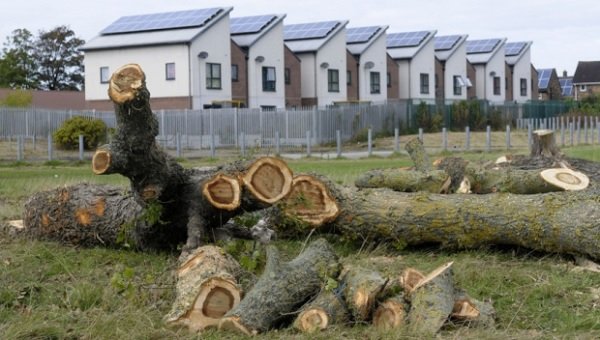 Dozens of dead or dying trees are being chopped down across Blackpool.

Concerned residents got in touch with The Gazette after seeing the decades-old trees being felled on fields on Clifton Road, Mereside.

But Blackpool Council was quick to explain its staff were carrying out routine maintenance work that takes place each autumn.
It said only the trees that are considered a danger are cut down.

Linda McEvilly, who runs the Care and Share group at St Monica’s Church, said she was shocked to see around 45 of the trees on the field had been marked with an orange cross – ready to be felled – last week.

She added: “There’s no point in chopping all these trees down – they have done no harm to anybody. I know the land belongs to Blackpool Council but it’s not right.”

She said she was unhappy the work had gone ahead without any consultation and questioned whether all the trees needed to come down.

But the council said it had only marked the trees that its experts had identified as dead or dying – and therefore posed a risk to the public.

A spokesman said: “We have been taking some trees down, which we do every autumn.

“We are doing that in Mereside and other areas.”

The council added that it had arranged to meet with residents and explain why the trees were being chopped down.

The spokesman added: “We are going round showing residents why the trees are dead or dying.

“We are not removing them for any reason other than they will become dangerous.”

The council also acknowledged it could have better informed residents before the work started and said it will try to improve communications in the future.