Trees felled at Tullaghogue in Cookstown for tourism development 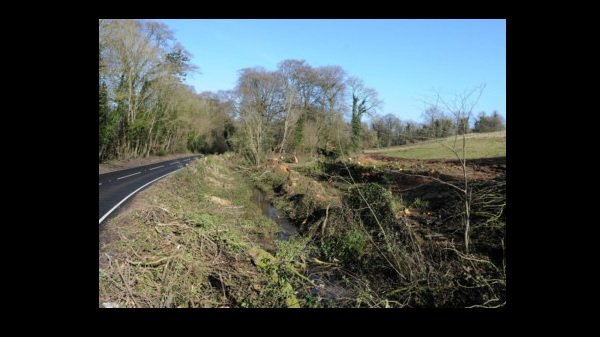 Department of Environment is considering planting 4,000 new trees at Tullaghogue Fort to offset felling at the historical site’s new entrance.

The news comes after concerned members of the public contacted the Mail after a large area of trees – some of which appeared to have been there for many years – had been cleared.

And on closer inspection, our reporter saw that quite a number of trees had been chopped down – with many more marked for the same fate.

When asked what was going on at the site, a DOE Spokesperson said they were carrying out “on-site works to deliver enhanced and safer public access to Tullaghogue Fort”.

It is hoped that the work, which started in early February this year, will attract more visitors to the historical site.

The spokesperson continued: “This phase of work included the felling of trees, most of which were young, and not yet mature, coniferous trees alongside the Tullywiggan Road, where the new access point will be developed.

“The trees were felled to provide sight-lines for vehicles coming into and out of the site, and to clear the actual path into a new parking area.”

When asked what considerations had been taken in relation to wildlife in the area – as small animals and birds could potentially lose their homes – DOE said they had been careful to make the relevant checks.

“Work started on site after the completion of ecological surveys, including bat, badger and habitat and was planned to take full account of the bird nesting season,” the department said.

“As part of the project a woodland enhancement plan will be developed to increase the ecological value of the remaining woodland.

“The proposals currently being considered include the planting of some 4,000 square metres of new woodland, primarily comprising native species such as oak and hazel.

“Enhancement work has also been conducted elsewhere at the site to bring the overgrown hedges and scrub vegetation at the monument back into active management.”

The rules around hedge cutting

Under Department of Agriculture rules hedge, tree or scrub cutting (including trimming and laying) is not permitted during between 1 March and 31 August.

This means that all scrub cutting, hedge cutting, laying and coppicing operations must cease on 28 February to avoid damaging birds, their nests and eggs – a provision of the Wildlife and Natural Environment (NI) Act 2011.

There is an exception to this requirement, where hedge cutting between 1 March and 31 August will be permitted if there is a health and safety issue, for example, roadside hedges.

However to comply with the legislation, have a good look for nesting birds and chicks first, mark any possible nest sites and then proceed with caution.

It is not necessary, however, to cut the ‘field’ side of the hedge each year – only cut the side which faces the road.