Trees for chop will become ‘maimed recollections of their previous beauty’ 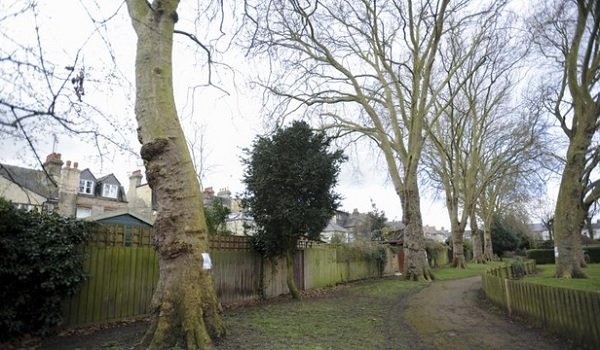 Trees will become “maimed recollections of their previous beauty” if the council decides to send chainsaws into a Cambridge park.

That was the opinion of one resident in Alpha Road next to Alexandra Gardens in Cambridge, which is home to five trees earmarked for the chop.

Cambridge City Council officers, who want to reduce the volume of each London Plane by 70 per cent, say they are causing cracks in Alpha Road homes – leaving the council exposed to huge bills.

Madeleine Barham, who bought her house for £12,750 in 1978, has had to have her kitchen rebuilt and the house underpinned over the years. But she is against the plans saying: “I’m not a tree hugger but this is wrong.”

Josh Berdine, a 38-year-old tenant, said he has seen no evidence justifying such drastic action. He added: “The trees may technically survive the cutting, but they will never recover, and will be relegated to maimed recollections of their previous beauty.”

At least two Alpha Road homes close to the trees were undergoing major works when the News visited.

A workman on one site reported the homeowner as saying: “I can’t speak because I’m too busy rebuilding my house”. Further down the road, workers were busy digging under a house.

The city council has produced a report saying the trees’ roots are to blame for damage to homes, which is leaving the public purse vulnerable to claims of more than £700,000.

The evidence has been disputed by opponents of the plan, many of whom fought off a similar tree-cutting scheme in the city park five years ago.

Councillors will consider the plan at a planning committee on Wednesday.