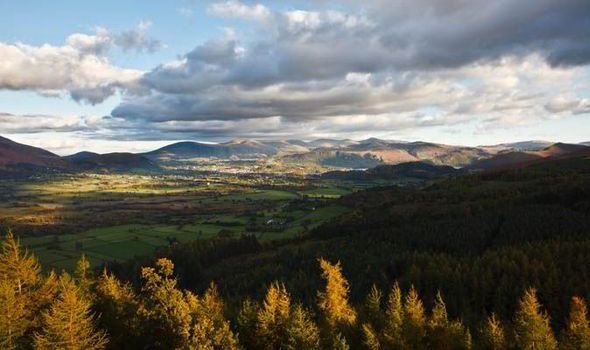 A huge tree-felling project has been ordered in the Lake District to contain a deadly fungus that threatens to sweep through woodland in England’s largest national park.

The phytophthora ramorum fungus, which was fi rst recorded in America, destroys larch and oak trees as well as other plants, including rhododendrons and bilberries.

Experts were shocked to find it had appeared at Whinlatter Forest, an area near Keswick which is popular for walking, mountain biking and adventure activities.

The Forestry Commission, which owns the land, announced that it has launched a 19-day programme to fell at least 27 acres of larch trees.

Spokesman Gareth Browning said he was concerned that trees which form part of a nearby Go Ape adventure playground could also become infected.

He added: “After we have completed the felling we will replant mostly with conifer treesof species which do not get ramorum disease.”

While the felling takes place, the B5292 road through the forest will be closed on weekdays, along with some trails and visitor facilities. Phytophthora ramorum was first identified by scientists in 1995, in California and Oregon.

It has since spread to mainland Europe and more recently to the UK, where the first outbreak was reported in 2002. Symptoms include bleeding cankers on the tree’s trunk and dieback of foliage.

The origins of the pathogen are still unclear and the only effective way of controlling the disease isto detect the fungus early and to destroy the infected trees. Worryingly, outbreaks of ramorum in the UK have increased since it was first spotted.

It has also appeared in other parts of Cumbria. Larch trees cover almost 10,000 acres – more than 4,000 hectares – of the county, six per cent of its total forest area, the Forestry Commission said.

Since 2011, the commission has identified more than 1,000 acres as being affected by the disease.

It said that more than 700 acres of larch woodland had to go under the axe to control the disease in Cumbria in 2013 but by last year the figure was scaled back to just over 230 acres.

The commission said the reduction was due in part to drier weather as well as to more people supporting schemes to stop ramorum spreading.

However, it is feared that recent prolonged spells of wet weather have helped the fungus to re-establish itself.