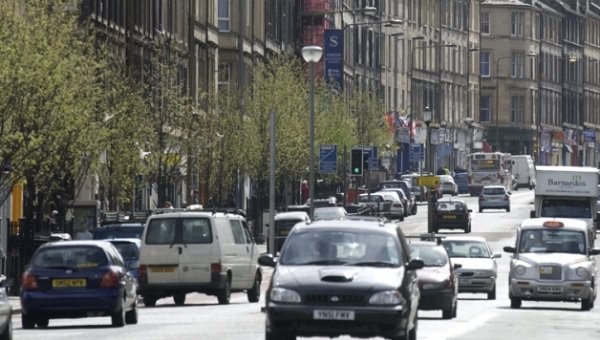 Dozens of trees uprooted during tram works on Leith Walk won’t be replaced even though track was never laid on the street, city chiefs have admitted.

Traders have been informed that trees can’t be planted on much of Leith Walk because council officials don’t know where underground utilities are located.

Officials committed in 2012 to replace the 50 felled trees with 100 newly-planted saplings, but many of the new trees will now have to be planted elsewhere in Leith where officials say they are more likely to thrive.

Works to redirect utilities underneath Leith Walk caused years of disruption and drove several businesses to the wall. However, while officials say they know where power lines, water mains and phone cables sit underneath the central portion of the thoroughfare where tram works took place, details for the rest of the street are held by private utility companies.

Leith businessman Keith Hales, who runs the Leith Walk Barber’s Salon, claimed the council was using utilities as an “excuse” not to plant trees.

He said: “Here we go again, another broken promise. I’ve lived in Edinburgh for 26 years and I’m still amazed at how drab and grey some areas are. If you walk down Leith Walk and some of the side streets, there’s no green at all.

“It doesn’t matter how nice the new roads and pavements look if it’s all grey stone all the way down.”

However, Charles Dundas from the Woodland Trust said it was important that trees are planted where they can thrive.

He said: “Urban trees provide green lungs for Scotland’s cities and they are an important part of Edinburgh’s  environment. Local authorities have a duty to ensure that tree cover is increased, but what’s more important than the number of trees planted is how those trees are maintained.

“It’s disappointing to learn that the council has changed its position on replanting Leith Walk’s trees, but the Woodland Trust’s aim is always to see the right tree planted in the right place.”

Councillor Lesley Hinds, transport and environment convener, said the council was “committed” to planting two trees in the area for every one dug up. She said: “We want the 100 trees to reach maturity, and there is a limit to the space available for mature trees on Leith Walk. Once the ‘hard’ landscaping is complete, we will work with a landscape designer to look at the inclusion of greenery in that part of Leith Walk and identify locations where trees will have a good chance to thrive for many decades.”

A council spokesperson said: “Local authorities do not possess comprehensive maps showing the location of utilities; when work is planned for an area, information is requested from utilities companies. Very often the information is provided with a caveat that it is not exhaustive.”