What do trees do at night? 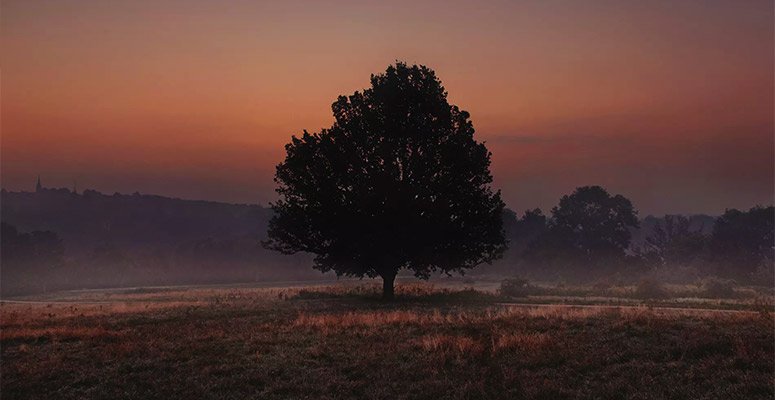 Asking what trees do at night sounds odd. They’re trees. They just stand there, right? Wrong. It turns out trees get up to a lot more than you’d imagine at night – it turns out they even go to sleep …

It’s easy to assume plants grow at a slow, steady rate around the clock – but Charles Darwin showed that they actually grow in spurts late at night, with plant stems elongating fastest in the hours just before dawn. They also drink heavily. Plants absorb water in their roots (a process called transpiration) and then, as water evaporates from leaves, it “pulls up” other water molecules behind it to fill the space (a phenomenon called cohesion). In trees, the long slender capillaries that suck up water can fail across the day if too much water evaporates too rapidly – internal columns of water break and fail. At night, trees refill, swelling every leaf and twig.

This isn’t obvious – indeed, the opposite may appear to be true. But in 2016, researchers at the Centre for Ecological Research in Tihany, Hungary, discovered something amazing. They pointed laser scanners at two birch trees – one in Austria and one in Finland – to measure any changes in their shape. Between two hours after sunset and just before sunrise, the trees’ branches drooped – by as much as 10cm. “No one has observed this effect before at the scale of whole trees, and I was surprised by the extent of the changes,” says András Zlinszky, researcher at the centre.

The drooping effect is caused by water pressure dropping within plant cells. Some plants even wrap their leaves away at night when they’re not needed and pump water back into cells at the base of the leaf to open them in the morning.

So how can branches droop as more water is being pumped in? Zlinszky speculates that the trees may be resting – literally going to sleep, just like humans. Plants don’t have the central nervous systems that control what we think of as “sleep” – but they do have circadian rhythms, tuned to Earth’s 24-hour light-dark cycle, even if they’re kept in light full-time.

During the day, branches and leaves are angled higher, straining up to catch as much sunlight as possible. Pumping water into every cell is an energy-intensive business and serves no purpose after the sun goes down.

Trees – like all plants – rely on a mixture of photosynthesis and respiration to survive. Photosynthesis uses light from the sun to power a chemical reaction – between water, carbon dioxide and a handful of minerals – that produces complex organic molecules. Having torn the carbon dioxide apart to grab the raw ingredients to make these molecules, the plant then throws away the rest – the oxygen, which is pumped out of plants during the day.

As animals, we use oxygen as fuel in burning up our food – specifically glucose, which we also get from plants, just one of the reasons they’re so important to us. But glucose is an important source of energy for plants, too, and to burn it they also need oxygen. Hence, plants respire – or breathe – in a comparable way to us. Respiration doesn’t require light, so when a tree stops photosynthesising it carries on “breathing” throughout the night, taking in oxygen and releasing carbon dioxide.

Of course, for us to be here, trees can’t use as much oxygen as they produce – plants generally produce four times the oxygen they need for respiration. In effect, trees are producing food during the day and consuming it at night. Work by a team from the John Innes Centre in Norwich has discovered that they use a chemical calculator to divide the amount of stored energy by the length of the night, so they don’t starve. This calculator is so adaptable that plants used to 12-hour days can adjust to an eight-hour day, recalculating their metabolic rate to their normal nightly rhythm.

But for some plants, this inefficient combination of photosynthesis and respiration is potentially deadly. “Trees in hot climates need to preserve water, so they don’t want to open their stomata in the midday sun,” explains Sandra Knapp, a botanist at the Natural History Museum. To avoid this, they only open these microscopic pores at night – when the plant has to take in enough oxygen and CO2 to last the day; they store this CO2 in a chemical called malic acid, then release it at night.

So next time you’re passing through the woods at night and all seems quiet and still, listen a little harder. All around you, trees are relaxing, letting branches hang, eating, stretching, sucking up water. Knapp suggests we take a leaf out of their book. “Trees can’t get up and walk somewhere else, so they have to make the best of the environment they’ve got,” she notes. “We can learn an awful lot from how they do things.”