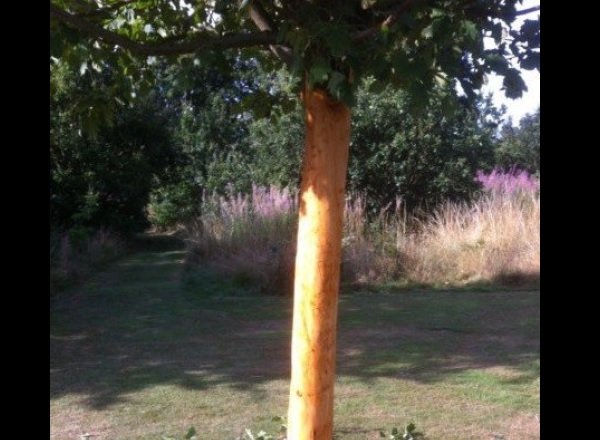 A rare St Albans tree often only found in ancient woodland will have to be cut down after mindless vandals stripped it bare of bark.

The 20-year-old wild service tree had the outer layer of its trunk ripped off between 11pm last Friday and 8.15am this Monday in Highfield Park, Hill End Lane.

Criminals also scratched graffiti into the tree’s surface once they had taken the bark off and the cost of the damage is believed to be in the region of £1,000.

Richard Bull, park manager and company secretary, said: “It has been so badly damaged that it will die. We will have to cut it down. They’ve literally stripped it from top to bottom.

“Because the bark is gone the tree can’t take up any water. The inside of the trunk is dead, it’s only the outside of the tree that is alive and transports the water and the sugar.”

He condemned the “wanton vandalism” and said: “We are all disappointed and upset because we do our best to maintain the park to make it a beautiful place for people to visit.”

A police spokeswoman said it was not known how many people were involved in the crime. She added that if anyone has any information they should call the non-emergency number 101.