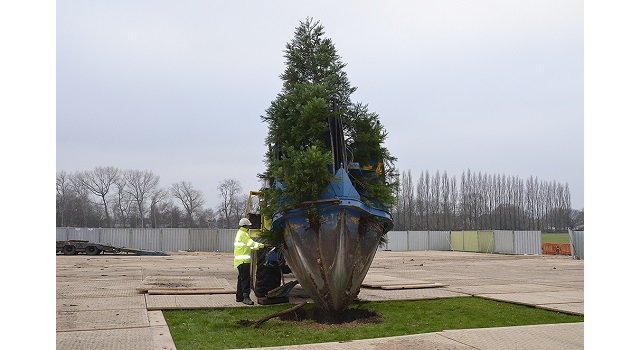 A team from Glendale Civic Trees, specialists in tree relocation, supply and planting was called upon when three large trees needed relocating to enable a new railway bridge to be installed.

The trees were situated in Ladybarn Park in the exact spot where a crane needed to be positioned to remove the old bridge and install its replacement.

Glendale’s new North West-based arboriculture enterprise was originally approached to relocate the trees, estimated to be between 15 – 20 years in age, but due to their size, semi-mature tree specialist Civic Trees was brought on-board to move them to the other side of the park.

Once the relocation was complete the crane was able to lift out the old bridge, which had reached the end of its useable life, and replace it with a new one.

Marc Greenaway, operations manager at Glendale Civic Trees, said: “The time constraints of the project meant we needed to act quickly to relocate the trees, which combined with wet ground and rather tight site access meant somewhat challenging conditions. In the end it took our team just two days to relocate the three trees.

“Tree pads were placed around the relocation site by the Murphy team to prevent the tree spade churning up the ground, and the team also ensured surrounding paths were cleared and the ground was reinstated.

“It was important to take good care of the trees throughout the process, particularly as they’re an interesting species with a lot of history having first been brought into the UK from California in the 1850s by plant collector William Lobb.”

Civic Trees has been supplying, planting and relocating mature and semi-mature trees since 1963. In addition to the largest tractor mounted tree spade in the UK, it also boasts the largest fleet of tree spades.