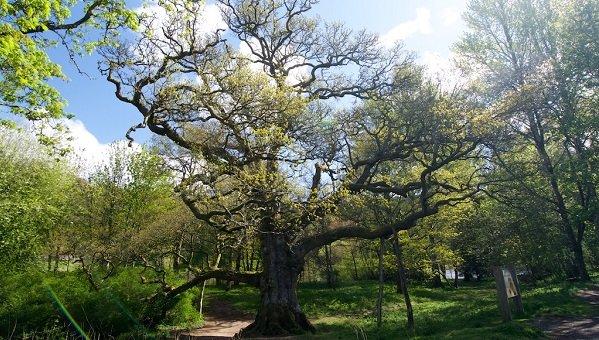 Crucial surgery to save the last surviving oak tree from the famous Birnam forest will begin next week, after the conditions of the tree have declined. Conservationists have warned that without the work, the ancient tree, made world famous by William Shakespeare, could split in half.

Made famous by the play Macbeth, the huge branches of trees in the Birnam wood are used as camouflage by soldiers as they advance on the Scottish king.

The celebrated oak, which is at least 500 years old, featured in the Macbeth and  continues to attract thousands of visitors to the region each year. Interest in the woodland was recently re-energised after last year’s highly acclaimed film adaption of the Shakespeare tale, with Michael Fassbender starring as lead.
The Perth and Kinross Countryside Trust revised a plan to preserve the Birnam oak after a study earlier this year revealed major concerns about its condition.

A spokeswoman said: “The ancient tree’s trunk is hollow, but its long branches are still growing. Without remedial action, the significant strain they are exerting could cause the trunk to split in half.

“Based on recommendations from one of Scotland’s top tree surgeons, the trust will carry out remedial works to mitigate these problems and keep the tree alive for years to come.

“The works planned include the removal of dead wood and some of the top and outer branches to help reduce the weight on the tree trunk.”
For health and safety reasons, the popular walking route past the oak will be closed off from 7.30am to 7.30pm each day. The work is scheduled to finish on Friday, July 1.