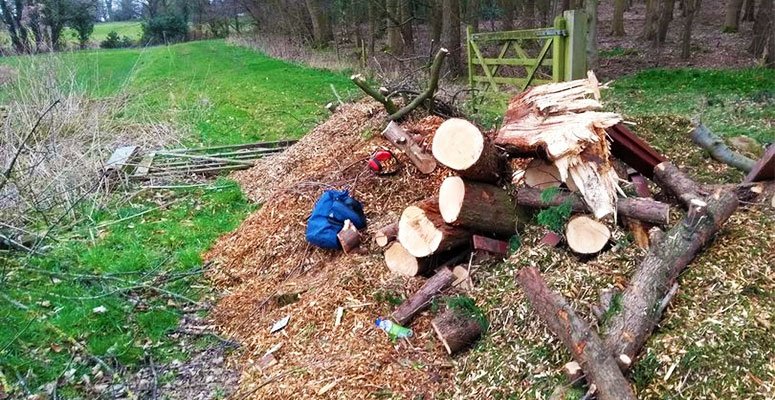 A tree surgeon has been fined more than £3,000 after dumping felled timber and waste on land off a major road.

Richard Carrington, of Congleton, was spotted by a local farmer unloading his flat-bed tipper truck in a field off the A34 near Moreton.

After leaving a pile of timber, wood chips and a wooden gate, as well as protective workwear, goggles and masks, the 28-year-old attempted to leave the scene but was blocked by a member of the public.

Police were called to the scene and provided the council with supporting statements towards the prosecution. Carrington was told at the time the matter would be investigated.

And last week he appeared at South Cheshire Magistrates in Crewe, pleading guilty to knowingly depositing controlled waste without an environmental permit

Now, Carrington, whose tree felling business Stump Up is based in Macclesfield, was ordered to pay a £2,000 fine, plus £1,000 costs and an £85 victim surcharge.

The businessman, of Box Lane, was also ordered to carry out 100 hours unpaid community work.

Councillor Janet Clowes, Cheshire East Council cabinet member with responsibility for rural affairs, said: “Fly-tipping is a blight on our countryside and this council will not hesitate to prosecute.

“I want to express my sincere thanks to the local farmer and those members of the public who took action to ensure this individual was caught in the act and who called the police.

“The heavy fine in this case sends out a strong message that the courts, as well as the council, take fly-tipping extremely seriously.”

The court heard the offence took place in March, 2018 when the farmer, who was out walking his dog, spotted the tipper truck approaching the field along a driveway.

Cheshire East Council has a robust policy for tackling fly-tipping in urban and rural areas and has invested £100,000 in new measures to crack down on offenders.

The council has the power to prosecute when fly-tipping has taken place on public or private property.

Prosecutions can result in heavy fines with a maximum penalty of £50,000 or prison for the most serious offences.