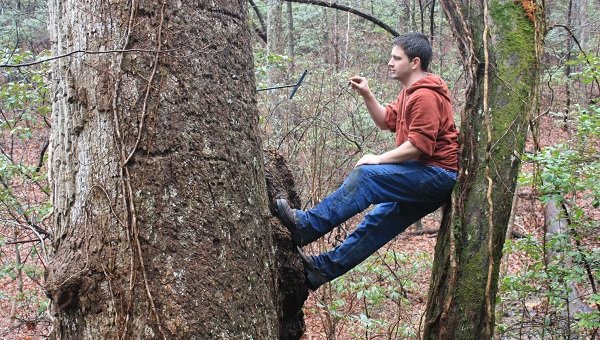 If you want to know how the weather has been along the East Coast for the last 1,000 years or so, ask David W. Stahle of the University of Arkansas. For more than 30 years, Stahle has been venturing into the swamps of coastal Virginia searching for the oldest bald cypress trees. When he comes upon a stand of these majestic conifers, he drills into their trunks and extracts samples of the trees’ annual growth rings. In one case, a sample revealed that the tree had been alive in 934, before the first Norsemen reached American shores.

Stahle is looking for evidence of extremely dry periods long ago — to better understand the risk of such droughts in the future.

“The instrumental record is only about 100 years long,” Stahle explains. (Widespread use of the rain gauge began in the 1890s.) “That’s not adequate to sample droughts, which have great socioeconomic impact today.” Tree rings can fill the gap in our understanding.

Among his discoveries: The East Coast has been lucky with rainfall for the past century. “Things today aren’t as bad as they used to be,” Stahle says. Tree rings provide evidence for what he calls mega-droughts, more intense and long-lasting than any of the 20th century — worse even than the devastating Dust Bowl drought of the 1930s.

Trees add a ring to their girth every year, and the rings are thicker when water is plentiful. Other factors can affect ring size, including damage to the tree from storms or insects, but Stahle corrects for this by sampling many trees at various sites. The most rings he has counted on a bald cypress is 1,650, in a gnarled, hollowed-out specimen on the Black River in North Carolina.

Samples from such trees allow Stahle to calculate the rainfall of particular years centuries ago.

For example, he can pinpoint a drought — it began in 1587 and lasted two years — that may have helped wipe out the Roanoke Colony, that group of British settlers whose disappearance from a fledgling island settlement in what is now North Carolina has never been conclusively explained.

“This drought may very well have contributed to the loss of the colony,” Stahle says, because “1587 was the worst single-year drought in the last 1,072 years in the Tidewater” as well as on the nearby Outer Banks of North Carolina.

Stahle began creating a statistical model correlating tree-ring width with drought by comparing 20th-century rings to 20th-century data about annual precipitation. “So precise are the tree rings, we can compare 1901 tree growth to 1901 precipitation,” he says.

As he looked back further, he found that long droughts were far more common and far worse than droughts in recent history.

For instance, in the 1960s, Washington experienced a shortage of rainfall that lasted about five years and resulted in water restrictions, brush fires in suburban woods and an alarming drop in the level of the Potomac River, with utilities sucking up 80 percent of the river’s flow on the worst days in 1966.

As severe as this was, Stahle found that it pales in comparison with droughts of the years 1000 to 1400, some of which lasted for 30 or even 50 years.

Persistent periods of minimal rain continued into the colonial era. When the Jamestown colonists landed in Virginia in 1607, they unwittingly arrived in the second year of a drought that lasted seven years, Stahle’s tree rings prove.

Historians are factoring this information into their accounts of why Jamestown suffered severe disease and starvation, problems that nearly wiped out the colony before reinforcements arrived in 1610.

The Mid-Atlantic again suffered a major drought for much of the time between 1691 and 1714, Stahle says. But tree-ring samples show that rainfall markedly increased in the 19th and 20th centuries.

While Stahle’s studies have focused on bald cypresses, other researchers have begun to look at the rings of the tulip poplar, a fast-growing tree that prefers less swampy environments.

Neil Pederson of Columbia University has shown that tulip poplars can live 600 or 700 years and that, like bald cypresses, their rings are excellent barometers of precipitation. Pederson has pushed back the East Coast record of upland tree rings to 1453, when Columbus was still a child, by studying the Hudson Valley’s colonial houses, whose beams and sills were often made from tulip poplar.

“We are just realizing the value of this incredible species,” Pederson says. “Tulip poplars are very sensitive to drought, shedding their leaves, and then their growth slows.” Less wood is added, meaning rings are narrower.

Like Stahle’s findings, Pederson’s show that the past century produced unusually heavy precipitation on the East Coast, with 1970 to 2013 being one of the wettest periods in the past 500 years.

We may have been lulled into thinking that such wet conditions are normal, Pederson cautions. Like Stahle, he has confirmed mega-droughts in centuries past, including one that began in 1555 and lasted 23 years.

The last very intense drought of extremely long duration along the East Coast happened in the 1760s, tree rings show. An “overall wetting trend” followed and continues to this day, Pederson says.

“Why this happened is still one of the big questions,” he adds. “It is currently difficult to understand the complexity of what brings rain to the eastern U.S. The dynamics of the atmosphere and how it interacts with oceans over centuries in regions as climatically complex as ours are still a mystery.”

Nor is it clear whether U. S. dry spells are correlated to ones elsewhere on the planet. “The 16th century mega-drought occurs around the same time as a drought over northeastern India,” Pederson says, “but we are not sure at this time if the two are related.”

Stahle emphasizes that tree rings do not predict the future. But they can demonstrate how long and severe droughts can be: “These mega-droughts were more severe and sustained than any we have witnessed in the modern era.” If one were to recur in our times, given the population growth in the Washington area since the last major drought in the 1960s, “we would see big impacts in water quality in sounds and rivers, which would cascade into the whole ecological web.”

Maynard is a freelance science writer and the author of six books on American history and landscape.