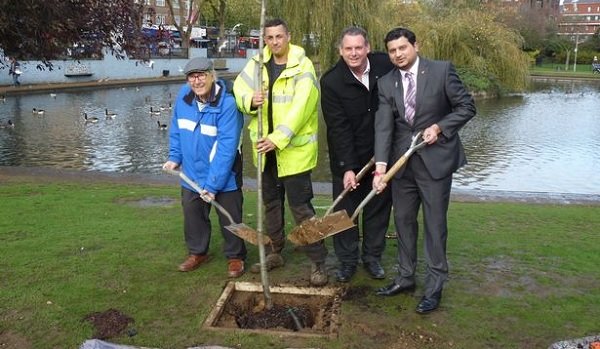 Since November, Hounslow Highways employees have been hard at work digging up plots and working towards creating a greener borough which has seen them complete planting 200 of 1,000 new trees.

Fifty trees were planted in Hounslow West, with 47 in Feltham North and 40 in Cranford.

Others have been planted in Feltham West, Heston Central, Hounslow Heath and Osterley and Spring Grove.

Deputy leader of the council and cabinet member for environment, Cllr Amrit Mann said: “Tree-lined streets are a familiar site in our green borough and this planting programme has further enhanced pockets in Hounslow where greenery may have been lacking.

“This work also is part of our promise to plant more than 1,000 trees in the next four years in our parks, open spaces and along our highways.

“As the months get warmer the tree saplings will need to be watered regularly.

“If you have one planted outside your home do give it a drink to help it grow.”

A total of 1,000 trees are expected to be planted following a pledge in November 2014.

The project has been part funded by the Mayor Of London and match-funded by Hounslow Council, to create a more environmentally-friendly street scene for families and visitors to the area.

Areas with lower numbers of trees were identified to benefit from the project.

Rob Gillespie, Hounslow Highways service director, said: “The Mayor’s tree planting initiative has provided us with another opportunity to enhance the street scene within the borough and bring the tree population in line with other London boroughs.

“The trees have been incorporated into our routine maintenance programme for the 11,400 street trees we look after.”

In a separate initiative, green-fingered residents have given a helping hand in beautifying Hounslow’s open spaces by planting 100 trees in six parks across the borough in another joint project involving Carillon and Hounslow Council.

These trees have small notices attached with their name and many have been protected to reduce the likelihood of dog damage and vandalism.