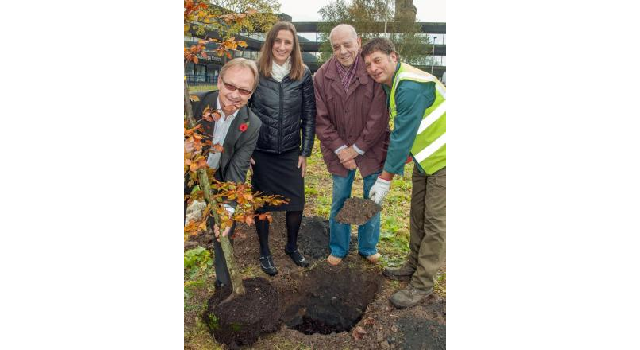 A leading Halesowen company has funded the planting of trees on a prominent roundabout to mark its centenary.

Five beech trees – three green and two copper – have been planted on Earls Island by Sandvik to demonstrate the firm’s commitment to the town.

John Young, from the Halesowen in Bloom committee, said several ideas were considered for the company to mark its milestone of 100 years trading in the UK, including a street name, but it was decided trees would be the best option.

Sandvik’s corporate communications manager Kim Olander said: “Sandvik is delighted to have been asked to sponsor the planting of the beech trees at Earls Island and that the trees will be viewed as a symbol of the organisation’s longstanding association with Halesowen town.

“We hope that the local community, now and in the future, will see this as a permanent reinforcement of our commitment to Halesowen and its people.”

Swedish-based Sandvik, operates in 130 countries and is a principal sponsor of Halesowen in Bloom. The Manor Way company has also donated a Christmas tree to the town since 1966.

Sandvik provides a wide range of industries with advanced materials technology products and employs 1,300 in the UK.

Its links here date back to 1871 and its first subsidiary company was established in Birmingham in 1914, moving to Halesowen in1958.