Tree planting in UK ‘must double to tackle climate change’ 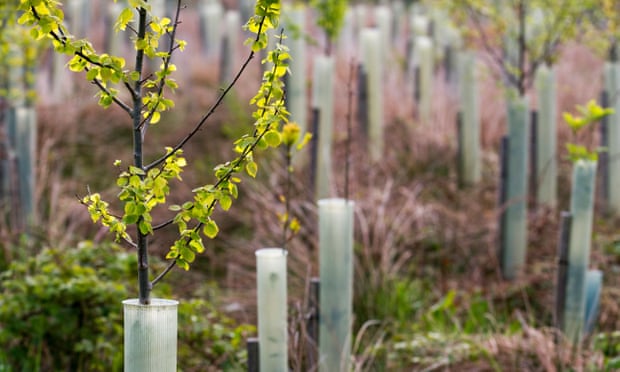 Tree planting must double by 2020 as part of radical changes to land use in the UK, according to the government’s advisers on climate change.

New forests would lock up carbon but also help to limit the more frequent floods expected with global warming.

The Committee on Climate Change (CCC) said land currently used to produce food would need to be converted to woodland, growing crops to produce energy and for new homes to accommodate the growing population. Up to 17% of cropland and 30% of grassland could be converted, the report says.

Protecting and restoring peat land, a huge store of carbon, is also vital, as is ensuring no food waste went to landfill by 2025, but is instead used to generate energy, it adds.

The CCC said that for decades food production had been rewarded with subsidies ahead of other public goods that land could provide, but that Brexit provided an opportunity to reward landowners for helping to fight climate change and its impacts as well as supporting wildlife.

“The incremental changes seen in the past to how we use land is not enough,” said Chris Stark, the CCC chief executive. “There is a window now to have a more radical policy.”

He said intensive farming and global warming were damaging soil and wildlife. “The land is suffering,” Stark said. “We are not saying farmers need to go out of business, we are saying that we need a different approach which is equally [profitable] if government policy supports it.”

The environment secretary, Michael Gove, said in January:“After a transition, we will replace [subsidies for owning land] with a system of public money for public goods.”

The UK population is predicted to increase by 14% to 75 million by 2050, the CCC report says, meaning the land used for towns and cities could rise from 8% to 12%.

The food production lost as fields are converted could be regained with improved efficiency, according to the report, as the best farms already produce double the quantity of food as the worst. The CCC also says healthier government food guidelines could reduce meat and dairy consumption,which produce the most greenhouse gases.

The report also tackles the controversial area of biofuels, including the wood burned in power stations such as Drax in Yorkshire, which produces 6% of the nation’s electricity. “The UK has some of the best rules for biomass sustainability, but there are still some gaps and we would love Drax and others to fill those gaps,” Stark said.

The key issue, he said, was ensuring that imported wood came only from forests where trees were replaced quickly to recapture the carbon dioxide emitted when burned.

Will Gardiner, the Drax chief executive, said: “We are committed to working with the government and stakeholders to go further [on sustainability requirements] – setting the standard for others to follow.”

The CCC report suggests demand for bio fuels could increase and more than 1 m hectares of UK land could be used for energy crops. They should, therefore, be used for only the most climate-friendly purposes, the report says, with biomass burning in power stations getting subsidies only after 2027 if the emissions are captured and stored underground. Bio fuels for vehicles should also be phased out as they go electric and instead used for aeroplanes.

Guy Shrubsole, a campaigner at Friends of the Earth, said:“This report is a wake-up call for a complacent government that we must completely transform the way we use land to avoid climate breakdown and make space for nature.”

Tree planting should go far beyond the CCC recommendation to double the UK’s forest cover, he added.