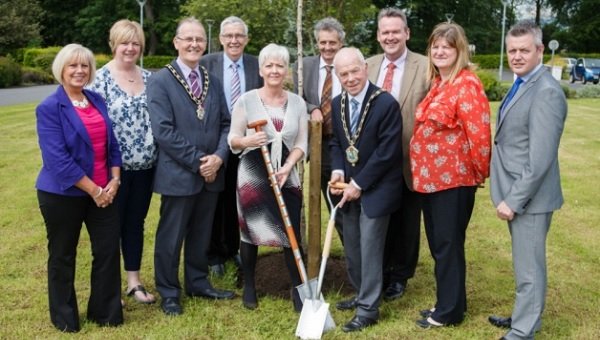 Tree planting ceremonies have taken place in recognition of the latest Freemen of the borough, health care workers serving in the Borough of Antrim. The trees chosen are Gingko Biloba and were specially selected for their health giving properties.

They will serve as a permanent reminder of the honour that the council has bestowed at Antrim Area Hospital, Holywell Hospital and Muckamore Abbey Hospital.

Out-going Mayor of Antrim, Councillor Roderick Swann, said: “Working within health care is a vocation. It is a profession that continuously gives to others and shows the utmost commitment and dedication.

“It is those individuals carrying out a wide range of roles in the care of our community that collectively make a significant difference to the quality of their lives.”

Copies of the Freedom of the Borough scroll are being made available to health care facilities throughout the Borough over the next few weeks.