Tree planters on a mission across Scotland 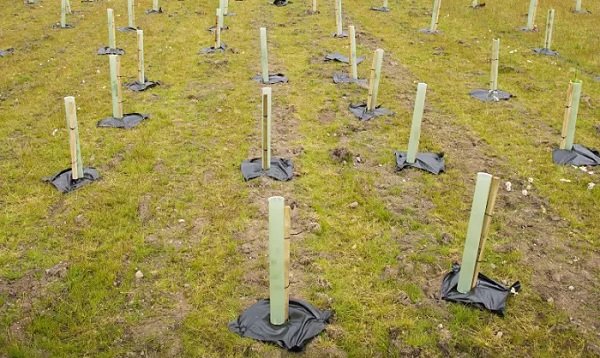 An army of volunteer tree planters is on the march across Scotland as 46,000 free saplings are distributed by Woodland Trust Scotland.

In Milton of Campsie the charity Silver Birch is adding to a maze it has created over five years with trees received through the scheme.

The group provides horticultural therapy working with adults with learning disabilities. The charity’s Mark Williams said: “We spread the work out over a couple of weeks so most of our 21-strong Garden Maintenance Team get to do some planting. The Tree Packs are a great idea and everyone is really proud of our maze.

“Every tree except the birch in the middle has come from Woodland Trust Scotland.”

Mull Community Council is planting a hedge at an island cemetery to give privacy to mourners.

Community Councillor Steve Willis said: “The cemetery is right by a main road which in years gone by was not much of an issue.

“With the general increase in traffic over the years, and more ferry sailings there has been a loss of privacy. If we can get a hedge established it will go some way to bringing back some peace.”

Carol Evans, director of the Woodland Trust Scotland said: “Planting a tree is one of the simplest ways to make a better future for your community.

“We are delighted that thanks to the support of our funders, so many people are being empowered to get young trees in the ground. The range of plantings is a great illustration of the many benefits trees can bring.”

A community group in Helmsdale, Sutherland, is appealing for living relatives of the village’s war dead to get in touch – with the chance to plant memorial trees.

The Helmsdale Woodlanders are receiving a total of 420 trees but plan to plant 71 silver birch – one for every serviceman of both world wars named on the Helmsdale and Loth war memorial.

Mike Ellis, of the Woodlanders, said: “We are erecting wooden crosses on the path to the war memorial – one for each of the fallen. They will be in place for a couple of weeks.

“As we are planting a new wood we thought it would be a more permanent gesture to dedicate a tree to each of them too. These will be planted in the next couple of weeks. We would love to hear from anyone who has a connection to the Helmsdale and Loth fallen, and who would be interested in helping with the planting.”

In Aberdeen Friends of Allan Park are replanting an area where diseased elm trees had to be felled.

Fladdabister and Ocraquoy Settlement Group on Shetland is adding to trees planted last year with help from the local Community Payback Unpaid Work by Offenders team.

Other reasons groups gave for applying included boosting biodiversity, sheltering allotments and sports pitches and enhancing the look of their community.

Clara Govier, Head of Charities at People’s Postcode Lottery said: “We are delighted to back this mass planting around the country, which does so much to enrich the environment and brings communities together.”

Kevin Sinfield, Head of Brand Marketing at Yorkshire Tea, said: “Yorkshire Tea has a passion for trees which spans 25 years, which is why we have a five year plan in place to plant one million trees in the UK and Kenya. We’re thrilled about the great work happening in Scotland and the benefits the local community will receive, from improved communal spaces to the environmental advantages.”

Over 26,000 trees are being supplied to 120 community groups across Scotland.

A further 20,000 trees are being supplied to 179 schools. The free tree packs are expected to arrive between November 7 and 11.

Free trees have been supplied to schools since 2004 and to community groups since 2010.