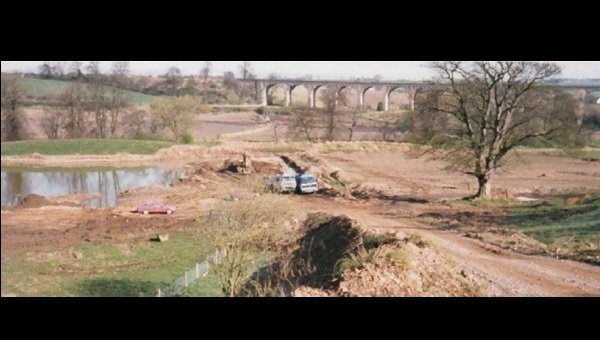 A developer who planted an award-winning woodland two years ago on the outskirts of Linlithgow, is threatening to tear it up for a housing and hotel development.

CEMEX is one of the world’s largest building materials suppliers and cement producers.

The company own a former aggregrates quarry at Kettilstoun Mains, and, in 2012, received a grant of more than £50,000 to replant the area located near the site of the Battle of Linlithgow Bridge as part of a restoration project with support from the Forestry Commission.

The seven hectares of woodland dominated by birch, oak and ash are now under threat of being destroyed as the company has lodged a ‘‘proposal of application’’ notice for planning permission in principle for a residential development at the former quarry.

The site has been carefully restored to create a positive environment for wildlife and now contains a number of different habitats including woodland, wetland and grassland, all of which support a rich variety of birds, plants, animals and insects.

The site is also criss-crossed with a number of tracks allowing people to explore and enjoy this attractive greenspace.

The site was commended in the New Native Woodland category of Scotland’s Finest Woods Awards, sponsored by the Woodland Trust Scotland.

Carol Evans, director of the Woodland Trust Scotland said: “Ripping out these saplings after just two years would be disgraceful. The planting was commended in Scotland’s Finest Woods Awards because the new woodland has been well-planned and planted to a high standard in an area opened up for people to explore and enjoy.

“We’re asking CEMEX to reconsider their plans and stick to the original proposal to plant a woodland that benefits people and wildlife and that creates an attractive green gateway to Linlithgow.”

A Forestry Commission Scotland spokesman confirmed: “The area that the grant covers is 7.58 hectares with a total contract value of £61,685. A capital payment of £50,315 was made in October 2012 for the initial planting and fencing associated with the woodland area.

“There are also further annual payments of £2274 for five years, totalling £11,370 for the maintenance of the planting.

“The contract runs until 2022 and if the woodland was removed to allow housing we would look to initiate recovery of the whole amount paid.”

CEMEX UK was asked to comment but declined to respond.