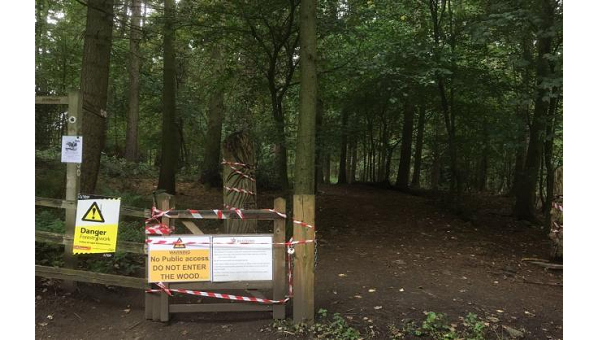 Work to fell more than 1,000 trees at a district beauty spot to prevent the further spread of a disease which kills a number of species is under way.

The felling is taking place in Betty’s Wood at St Ives Estate, near Harden, Bingley, to remove larch and sweet chestnut trees, which have either been infected or are threatened with infection.

Work has been going on at St Ives to remove rhododendron, which acts as a host to the phytophthora ramorum disease which kills a number of species of trees.

Despite this, the Forestry Commission also detected the disease in larch trees at St Ives and served a Statutory Plant Health Notice on Bradford Council to fell and remove the infected timber before the end of October to prevent the spread of the disease.

Betty’s Wood will be taped off to prevent public access while the work, involving heavy machinery, is carried out.

A Council spokesman has said space left by the felling will be replanted with tree species, including elm, ash and birch.

The work is scheduled to be finished at the end of October.

A Council spokesman said there is no risk to human or animal health from phytophthora, but bio-security measures will be taken to control the risk of the infection spreading to other trees. The larch trees were planted at the site in 1948.

Pam Laking, Friends of St Ives group chairman, said residents were sad the felling had to take place, but it was necessary.

She said: “It is a particularly beautiful wood. People have been walking in there since the trees were planted. It is going to be a massive change.

“It is good that they will be replaced with elm, ash and birch trees. It has got to be done because otherwise it will spread.

“Nobody knows if they are carrying it. They could not test every single tree.

“It is going to be quite a shocking change at first. But in 30 or 40 years’ time it will look beautiful in a different way.

“Hopefully it will be a better wood. There is a positive to this. A lot of these trees would have fallen down.

“It’s a decision that has not been taken lightly, but it has to be done, they have no choice.”

A Bradford Council spokesman said an estimated 4,000 metric tonnes of logs will need to be felled over the 12-hectare area covered by the Statutory Plant Health Notice.

The timber and the brash (small branches and leaves) have been sold through competitive tender to the contractor, Tilhill Forestry. The logs are destined for a variety of markets including construction timber. The brash will provide biomass for power generation.

The Council will be applying for a re-stocking grant to replace the felled trees to add to those species that remain.

Part of the St Ives Estate’s Lower Car Park will be closed, so that work can be carried out safely.