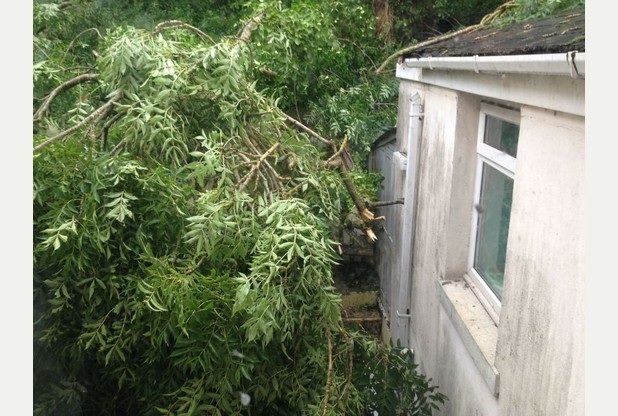 A Torquay couple have been left to pick up the pieces after a tree collapsed into their back garden.

Eric and Sue Mills, of Hele Road, will have to pay for the removal of the tree, because nobody knows who has responsibility for it.

The couple had long feared it would crash towards the house but were told it sits in ‘no man’s land’.

Now they fear a second larger tree could fall and cause more serious damage to their home.

“We have been saying for years that the trees at the back are dangerous.

“Now this one has come down and glanced off my bathroom extension.

“It has caused a little bit of damage but the other tree just above it is probably more dangerous and that will probably come down too.

“I’ve been asking for years who owns it but have just been told it is no man’s land.

“Somebody somewhere must know. I would go in there and cut the other one down myself but might get done for taking it down.

“I will get this cleared but the next one might come down on the house.”

The area at the back of the house in Hele Road is thick with vegetation and there are several trees growing on land which slopes upwards towards Pendennis.

“My 12-year-old daughter doesn’t want to sleep in this bedroom because she is frightened of it falling down,” said Sue.

“We have been here since 2002 and have never known the trees at the back to be cut back.”

A spokesman for Torbay Council said it could not help because it did not own the land.