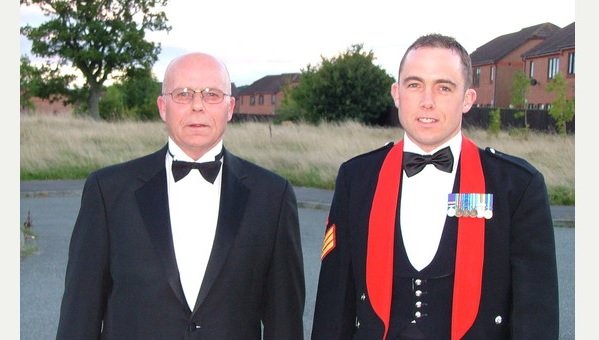 A soldier killed in Afghanistan will be remembered with the planting of a tree at a major military memorial site.

Sean Upton, of Beeston, was on foot patrol in Sangin, in Helmand province, when he died in an explosion.

The family of the 35-year-old dad to Ewan, 16, and 12-year-old Hollie, have already successfully campaigned to have the A453 in Nottingham renamed Remembrance Way.

Now they say they are delighted that a further tribute will be made when a willow tree is planted in honour of the Warrant Officer Class 2 with 5th Regiment Royal Artillery, who died in 2009.

Not sure what all the fuss is about with the new Samsung Galaxy Note 4? Samsung’s own James White spills the bean to Vodafone and reveals some interesting facts about the new model

Around 15 members of Mr Upton’s family will gather for a tree dedication service at the National Memorial Arboretum, in Alrewas, Staffordshire, at 1pm on July 11.

Around 60 past and present members of the artillery will also attend, and the ceremony will feature three pipers and standard bearers.

Mr Upton’s father Jack Upton, 68, of Beeston, said: “I think it’s a fantastic gesture. We have visited the Arboretum previously as Sean’s name is on the wall there. This is an extra tribute.”

The idea came from David Thomas, of the Royal Artillery Association Nottingham branch, as two trees have previously been dedicated to members of the artillery.

Mr Thomas, 55, who works for Rushcliffe Borough Council and lives in Bestwood Village, served with the 5th and 32nd regiments of the Royal Artillery for 25 years.

The dad-of-two and grandfather-of-two said: “Sean was a local lad and it’s what the artillery do – he is part of the ‘gunner family’.

“We thought it was right and proper that Sean’s family has somewhere to go to reflect on his life.”

Andrew Baud, a spokesman for The Royal British Legion, the parent charity of the National Memorial Arboretum, said: “We are home to over 300 memorials and over 30,000 trees, many of which have personal dedications.

“Forming a living and lasting tribute, our flourishing landscape is designed to provide some comfort to bereaved family and friends.

“As a result, many of our visitors to the Arboretum tell us that instead of it being a sombre experience, they it find it a place of reflection and somewhere that is spiritually uplifting.”