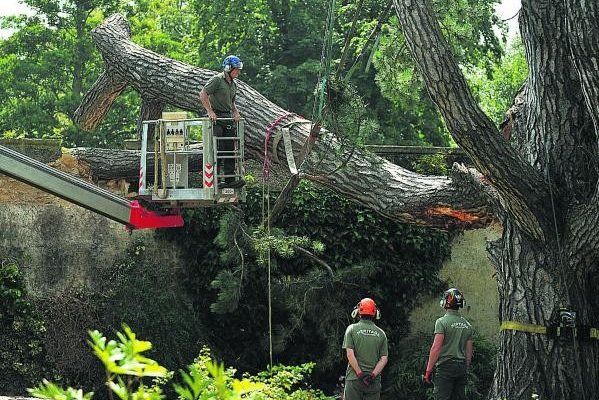 Botanic Garden staff have been compared to an evil wizard for cutting down a tree that is said to have inspired Lord of the Rings author JRR Tolkien.

The black pine – pinus negra – is being felled for safety reasons after two of its branches fell off last weekend.

It is believed to have been the inspiration for the Ent creatures featured in the Oxford author’s novels.

But since bosses at the High Street garden made the announcement, they have been inundated with messages from fans of the trilogy.

Acting Garden director Dr Alison Foster, below, said one person had even likened staff to the Lord of the Rings villain Saruman.

In the first and second books in the series, the wizard is corrupted by the power of the dark lord Sauron and has the trees around his stronghold torn down.

Dr Foster said: “There are a lot of people out there who are very big fans of JRR Tolkien and some of them have taken this to heart.

“It is an alternative version of reality and in one case someone has likened us to Saruman and emailed a number of staff to complain, as well as Oxford City Council.”

So far about 50 emails have been received, she said, with many fans asking for a piece of the tree to keep once it has been felled.

Dr Foster said: “It is a complex exercise because we can’t give everyone who asks a piece of the tree.

“But we are thinking about what is most appropriate and may use the wood to make some benches.

“Whatever we choose has to be a celebration of the tree.”

Workers are expected to be at the Botanic Garden until the end of tomorrow, chopping the 20-metre tall tree into large sections. Researchers will also take a sample from the main trunk so that, for the first time, its age can be accurately measured.

The decision to fell the tree was made after experts from the city council and Oxford University examined the pine, but it has not been determined why the two branches fell off, damaging a wall.