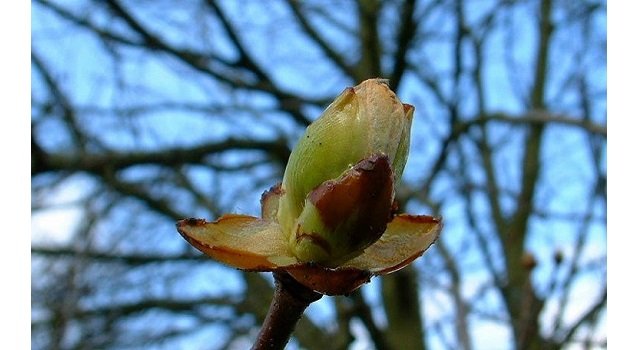 A collaborative study between the Met Office and Woodland Trust has revealed that the timing of UK budburst for nine out of the eleven tree species studied is significantly related to average temperature in March, with considerable variations in the magnitude of the temperature responses between species and regions.

The study found that a 1 °C lower (or higher) temperature during March was associated with later (or earlier) budburst of between three days for alder in the south-east and six days for European larch in the north-east.

These results back up earlier studies revealing an overall long-term trend of earlier budburst in the UK as average spring temperatures have warmed. Such observations of the timing of natural events and their relationship to climate is known as phenology and are recorded on the Woodland Trust’s Nature’s Calendar survey.

This phenological study looked at the relationship between various daily climate observations– temperature, rainfall and sunshine hours – and the timing of budburst each year between 2000 and 2016.

Rachel Abernethy is the lead author on the study from the Met Office. She said: “Although there is a tendency for budburst to occur earlier, there was a later than average budburst of most species in 2016 associated with cooler March and April temperatures in the UK.”

Rachel Abernethy continued: “The really interesting thing about this research is the annual variation in timing of budburst. It is important to realise that seventeen years (2000 to 2016) is a very short time when studying climate, and annual fluctuations will be evident.

“For example, we had a colder spring in 2016 than previous years and this resulted in a delay in budburst of many tree species. Understanding how nature responds to a changing climate – whether it is warmer or colder from one year to the next – is important. Hopefully this work can contribute to long-term phenological studies in the future.”

“Our Nature’s Calendar volunteers have recorded literally millions of pieces of information since the year 2000 and without their support we would understand far less about the impacts of weather and climate change on wildlife in the UK.”

Professor Tim Sparks, University of Coventry, added: “We know that most trees respond to increased temperature by leafing earlier in spring. This work confirms that this simple fact is complicated by differences between tree species and between regions”

Dr Debbie Hemming, of the Met Office Hadley Centre, leads a group studying the interactions between vegetation and climate. She said: “Collaboration between phenology and climate experts has enabled better understanding of the sensitivity of prominent UK tree species to climate variability and climate change.

“This knowledge can be used to inform appropriate management strategies that support healthy UK trees and woodlands into the future.”