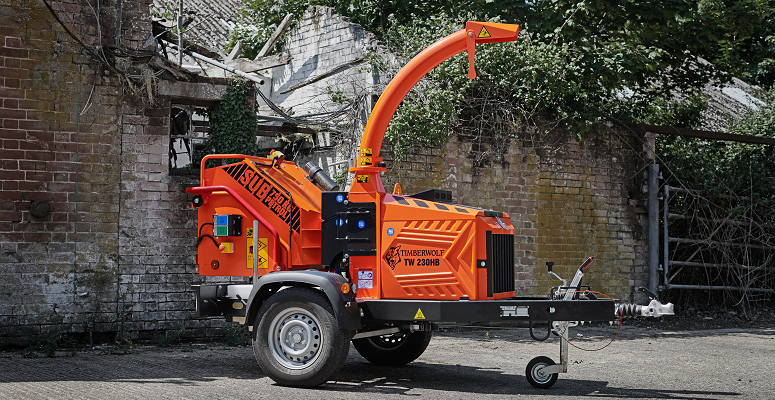 The Timberwolf TW 230HB is a direct replacement for the TW 230DHB and TW 230PAHB models, Europe’s best selling sub-750kg six-inch road tow wood chipper range. Available with a 24.8HP Kubota V1505 diesel engine or a 37HP Briggs & Stratton Vanguard V Twin petrol engine, the TW 230HB offers customers the option to choose the fuel type that suits them without compromising on power. All the features that made the TW 230 road tow range hugely popular with arborists remain unchanged: the performance, the easy access to the engine, the wide infeed hopper, the WolfPort for quick blade changes and the large positive feedback infeed controls.

The Timberwolf TW 230HB diesel powered variant is the first Stage V compliant wood chipper in its class to remain under 750kg in weight. The Kubota V1505 diesel engine now delivers 24.8HP but with intelligent engineering and design processes, the infeed power has been improved despite the lower engine rpm.

The Timberwolf TW 230HB petrol powered variant has been enhanced with increased ventilation to keep the engine cool and an improved exhaust design. The exhaust system has been redesigned so it sits within the chassis to offer better protection from impacts when travelling over rough ground or road furniture, and a patent pending exhaust diffuser has been introduced, reducing exhaust gas temperatures by up to 150 degrees centigrade.

The Timberwolf tracked wood chipper range has grown with the addition of a petrol variant of the popular six-inch tracked machine, the Timberwolf TW 230VTR. The introduction of a Briggs & Stratton Vanguard V Twin 37HP petrol engine option ensures the demands of arborists who prefer to use this fuel type are met. The petrol-powered TW 230VTR has been redesigned to ensure the machine remains perfectly balanced despite the addition of a lighter petrol engine and improved ventilation ensures the engine bay is kept cool during operation.

The TW 230VTR diesel model is powered by the same reliable Kubota diesel engine used in the TW 230HB models and the hydraulics systems have been upgraded to ensure tracking speed is not compromised by the reduced engine rpm.

The TW 230VTR range has expanded but all the features that gave it the market leading position as the go-to tracked machine for the professional arborist are still there, including the ergonomic ride on platform, the WolfTrack two-speed smooth running tracks, the variable track width and the easily removable hopper which helps the TW 230VTR get through the narrowest of site access points.

“Timberwolf owners love that our machines are easy to maintain, simple and quick to service and very reliable, and changing to a petrol-powered 8 inch tracked range means our customers get exactly what they want at the price they want it. To include a high-powered Stage V diesel engine would result in a product that needed specialist servicing, increased down-time resulting from the Diesel Particulate Filter (DPF) cleaning cycles and high engine temperatures which bring their own risks to the equation. With engines using a DPF there is also the risk of significant engine damage if the wrong grade or contaminated fuel or engine oil is used and we did not want to introduce these issues for our customers.”

To arrange a demonstration of the new range of Timberwolf wood chippers, visit www.timberwolf-uk.com/demo