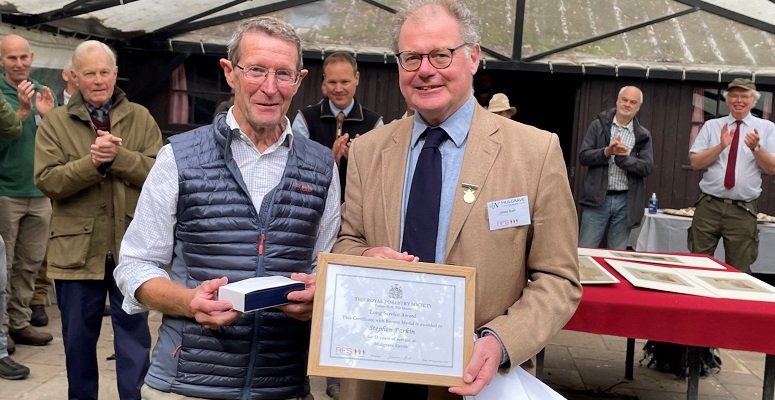 Three Yorkshire foresters who have clocked up more than 140 years of service at two of Yorkshire’s finest estates have been recognised with Long Service Awards from the Royal Forestry Society.

Jim Mortlock, 67, Head Forester at the Mulgrave Estate, near Whitby, received a 51 years’ service bar having been presented with a 40 years’ award in 2011. His remarkable career has included working closely with Lord Normanby to fully implement a woodland scheme that Humphrey Repton put together in his red leather-bound book in the 1700s. It had initially been part finished.

Jim has also thinned all the 2,500 acres of plantation woodland on the Mulgrave estate and developed a thriving firewood business serving the local community.

He says: “I have enjoyed everything, the challenge, growth, the change and been involved in such great historic plans and project. Putting together a profitable business and turning employment into a hobby.”

Mulgrave Estates Director Robert Childerhouse commented: “Jim has clearly been an inspiration and role model to us all. His achievements will be enjoyed by everyone for a very long time. The many hundreds of thousands, if not millions, of trees planted under his watch will be his legacy.”

Jim’s forestry team colleague Stephen Parkin, 66, also received a 50 years’ award. His first job was at Skelton plantation in August 1971. He has since hand thinned the Hutton plantation and managed the trees around the castle and garden.

He says: “After many years of working on the estate, you become part of it, growing up on the estate and in the woods was fantastic, learning work and life skills from older colleagues (Bob Newby and Gordon Stonehouse of note).”

Robert Childerhouse added: “If I had to say one thing about Steve it is ‘they don’t make em like this anymore’. Steve always arrives at work with a positive attitude and high energy, he teaches people skills and trains others very patiently. His knowledge of the estate is second to none and I wish he was retiring in July 2032, not 2022!”

From Parlington Estate, near Leeds, contractor John Taylor, received a 40 years’ award. Parlington Estate woodlands have depended on the efforts of three generations of the Taylor family over decades. John was part of his father’s team, assuming leadership upon the death of his father. Now the team includes the next generation (Tommy). John was a major contributor after his father to the ongoing development of timber crops for sale, alongside the essentials of estate management and wildlife conservation.

Former RFS President and Consultant Andrew Woods, who provided management advice and supervision of operations over 40 years, says: “During that time, John arrived to join his father and worked tirelessly to achieve the development of the timber crops and habitats. There is no doubt that his work greatly contributed to achieving the estate woodland objectives.”

The Awards were presented by RFS President Sir James Scott at an RFS visit to Mulgrave Estate.