Three spectacular trees to be chopped down in Worcester 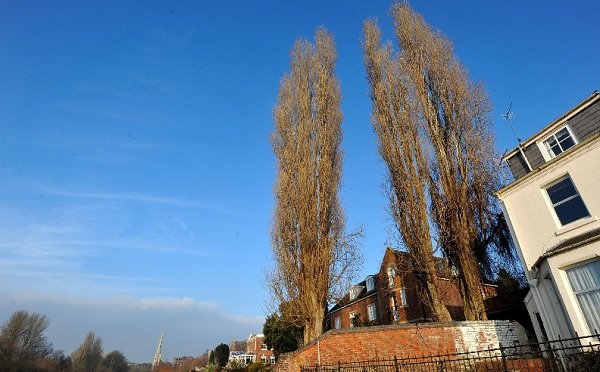 The trio of Lombardy Poplar trees, which tower over the landscape behind the hotel just yards from the River Severn, are going to be removed after hotel bosses said they were in a rapidly worsening condition.

Worcester City Council’s planning committee agreed to give it the nod after deciding the trees can only removed over a staggered period of five years.

Back in 2008 the hotel applied to chop them down but the council blocked it, saying their removal would have a “highly detrimental effect” on the riverside Conservation Area.

The new planning application led to a condition survey which found one of the trees was extensively decayed, another has dieback disease and the roots of two of them are also putting pressure on an adjoining wall.

Rather than axe all three, just one tree will be felled immediately, alongside trimming work to chop the top off the other two by a maximum of six metres.

After three years the second tree will be felled, and the final Poplar will then go after five years under a staggered programme.

The hotel will also be instructed to plant three replacement trees immediately, which will be Oak Cultivar ones.

A report before the committee said it would be “several years” before the newly-planted ones are sufficiently established to offer a similar visual appeal as the current trio.

But it insisted the strict conditions offer a “less extreme” alternative than hacking all three down right now, which the committee gave the nod to.

The damaged wall, which is right next to a private property, will be repaired.

Councillor Robert Rowden said: “I welcome this, one of the trees is particularly close to a resident who lives on the riverside and it’s time something was done.”

Councillor Paul Denham added: “Of the options available to us, the better one is this proposal because it does give the chance for replacement trees to be planted before all of them are taken down.”

The committee agreed to nod it through unanimously.