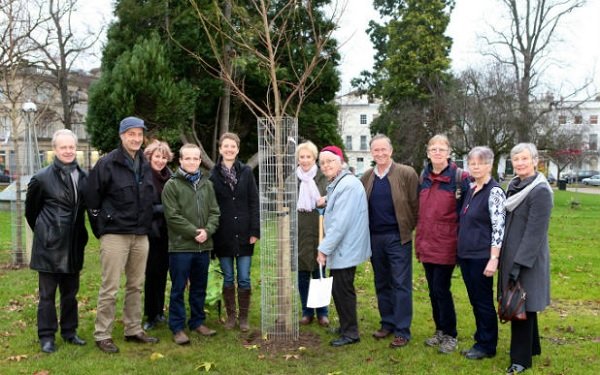 Three saplings have been planted to replace the 200-year-old iconic Copper Beech tree in Montpellier Gardens which was chopped down for safety reasons in July.

The tree was removed after council officers agreed that it had become a hazard and posed a serious threat to the general public who used the park.

Following inspection, it was discovered that the former tree, which was planted in 1805 to celebrate the Battle of Trafalgar, had weakened and would surely collapse if not attended to.

Now, experts have put their heads together and have chosen to plant three Liquidambar trees, which could grow to more than 15m tall.

Christopher Chavasse, senior tree officer at Cheltenham Borough Council, said: “I am hopeful that they will make a good substitute after what was a hard decision to take down the former Copper Beech.

“They will all become quite broad trees and, although it won’t be us who appreciate them in the future, like our predecessors before us, we have to do our bit.”

Eight years ago, the gardens were spruced up after a £1.8 million lottery grant was awarded to revive the grounds to their former glory.

Sir Robert Wright, chairman of the Friends of Montpellier Bandstand and Gardens, said: “We are the eyes and ears for the council in terms of issues within the park.

“We have a very good relationship with the council officers and have also been involved in establishing the Green Flag for the gardens.

“Our aim is to help protect and maintain of the few recreational spaces that make Cheltenham iconic.

“Sadly, the Copper Beech which had stood in the park since it was planted in 1805 had to be cut down and we respect the decision that it was becoming too dangerous.

“Now we hope by planting three new saplings, we will help preserve the park for our successors the way they did in the 19th century.”

During a presentation of the trees on Monday, Cheltenham Tree Group members were shown an iconic spade which was twice used by Queen Elizabeth II when she was a princess to plant trees in Cheltenham.

The first included an oak near the GCHQ building which was lost after plans to change the site’s entrance were botched.

The Cheltenham Tree Group consult the council any time a tree is removed or replanted in the town and offer small trees than can be retrieved at their nursery at Balcarras School, in Charlton Kings, in exchange for a donation.

Group tree warden Helen Fielding said: “From our perspective, we were very sad that the beech tree had to come down but we agreed that it was the best thing to do.

“We were consulted about which type of tree should replace it after suggestions were made by our members.”