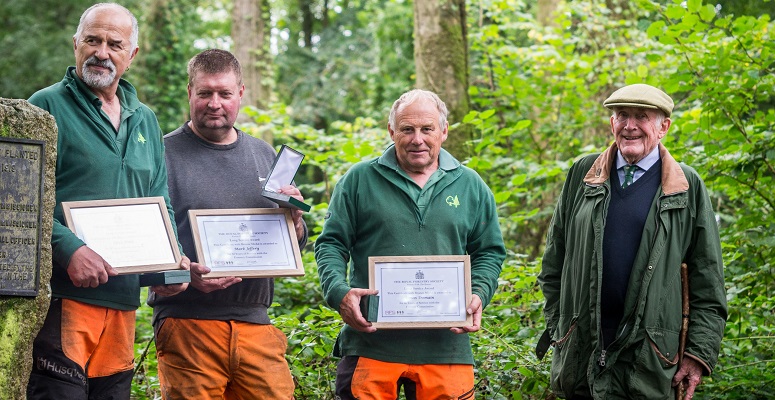 Between them, Clive Hunt from Dalton, Mark Jeffery from Tavistock and Simon Tremain from Okehampton have more than 117 years of service with Forestry England (an agency of the Forestry Commission) across woodland in North and South Devon.

Simon Tremain, who has clocked up 46 years, joined the Forestry Commission in October 1973. He was the last Forestry Commission machine operator in the South West and took part in a 1989 Challenge Anneka to transform a derelict barn into a boat house. He also helped to create the commemorative planting at Eggesford to mark the 75th anniversary of the Commission.

Clive Hunt has worked on the Eggesford Forest blocks for almost 40 years under 11 successive foresters. He also took part in Challenge Anneka and was later instrumental in helping to establish a successful Forest Craftsperson Apprenticeship scheme.

Mark Jeffery has 32 years’ service on Dartmoor and in Tavistock Woodlands. He received a Civil Service Award for the work he carried out supervising a Dartmoor Prison rehabilitation project for 12 years. He has twice been a runner up in Devon’s felling championships.

Lord Clinton of Clinton Devon Estates and a past president of the Royal Forestry Society made the awards.

“Clive, Mark and Simon have made an outstanding contribution to woodlands across Devon. They are very capable and take immense pride in the work that that they do, setting high standards for themselves and those around them. We cannot do justice to their contributions over the years.’’

‘’Signs of Mark’s contributions can be seen throughout Dartmoor and Plym and his work rate is legendary. Clive and Simon have helped to shape Eggesford and the wider North Devon beat, showing dedication throughout their careers and taking particular pride in mentoring and developing apprentices.’’

“They all have a wealth of knowledge and passion for forestry, particularly timber production, and continue to look for ways of improving the quality of the timber in the area.”