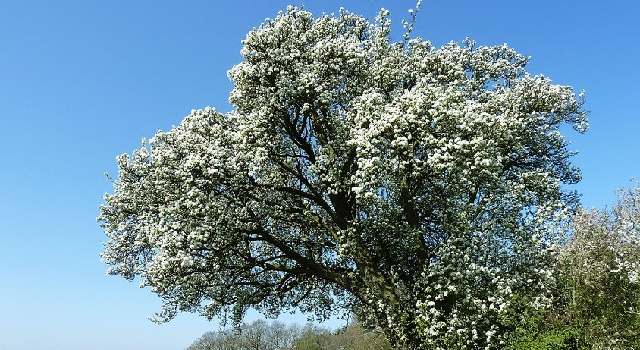 An old and large wild pear tree has been chosen by the public as England’s Tree of the Year for 2015. The Cubbington Pear Tree near the village of Cubbington in Warwickshire sits on the proposed phase 1 line of the new HS2 route and could be lost once construction gets underway.

The pear tree received over a third of more than 10,000 votes cast by members of the public in the contest organised by the Woodland Trust and supported by players of People’s Postcode Lottery. The tree joins the Suffragette Oak from Scotland, Peace Tree in Northern Ireland and ‘Survival at the cutting edge’ from Wales in the European Tree of the Year contest in February 2016.

Tree of the Year profiles:

Cubbington Pear Tree – Believed to be over 250 years old, the tree is a local icon which has stood for generations at the top of a hill near South Cubbington Wood but is now under threat because it lies directly in the path of HS2*. It is thought to be the largest wild pear tree in Warwickshire and the second largest in the United Kingdom.

Suffragette Oak – This oak within Kelvingrove Park is a big part of the history of Glasgow’s women. It was planted by suffrage organisations on 20 April 1918 to commemorate the granting of votes to women. Beside the tree is a beautiful plaque, placed by Glasgow District Council in 1995.

Peace Tree – This oak was planted in Belfast on Empire Day, 1919. It is primarily a tree of remembrance and peace, in honour of local peoplewho never returned from the First World War. It became an important focal point for veterans for many years after the war, before seeminglybeing forgotten for almost 50 years. The tree was rediscovered in 2006 and has since become reinvigorated back into the community.

Survival at the cutting edge, Llanarthne – “When I was born, what is now the National Botanic Garden of Wales was seven starter farms. To earn pocket money at the age of 14 I was given the job of clearing an overgrown paddock. Armed with a scythe, I cleared vast tracts of it, until I developed an excruciating pain in my elbow and had to stop. On my return two days later, the farmer reminded me (though they hadn’t told me before) not to cut down the oak tree in the paddock. So, but for my elbow, I would have destroyed this beautiful tree.” Terry Treharne


Beccy Speight, Woodland Trust chief executive, said: “These four trees all demonstrate the intrinsic way our lives are linked to the natural world. Sadly many iconic trees do not have the levels of protection they deserve and this contest highlights the need to ensure they remain for future generations to enjoy and memories to endure.”

Annemiek Hoogenboom, country director of People’s Postcode Lottery said: “Tree of the Year is a special competition that connects people with trees in a very real way.  Sharing and remembering the stories that we tell about trees helps future generations to love and protect them.

I’m delighted that players of People’s Postcode Lottery help to discover amazing trees from all over the UK.”

*The Cubbington Pear Tree is one of 20 ancient, veteran or notable trees within the HS2 Phase 1 construction boundary. Another 18 lie within 200m of the proposed phase 2 route.

The Trust’s V.I.Trees campaign seeks to create a register for Trees of National Special Interest in all four countries and over 13,000 people have so far supported the charity’s call for action. For more information visit www.woodlandtrust.org.uk/campaigning