Thousands of trees to be replanted on Slindon estate, West Sussex 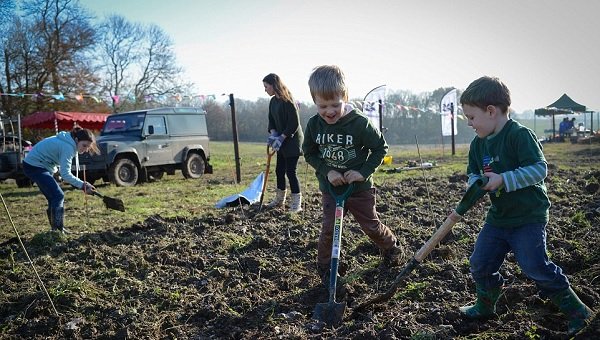 Volunteers are planting thousands of trees as part of Britain’s biggest ever man-made forest, in an attempt to replace entire swathes of woodland that were cut down for the war effort in WWI.

The 185 acre site, which covers the same area as a whopping 105 football pitches, will be planted with 13,500 trees to try and restore the Slindon estate on the West Sussex South Down to its pre-First World War state.

During WWI, a large proportion of Northwood was felled for timber by Canadian foresters using prisoners of war to produce materials such as coal mine pit props and trench reinforcements.

Now, hundreds of green-fingered volunteers have signed up to take part in the ‘Rise of Northwood’, the National Trust’s biggest project. Over 3000 trees have already gone in and the group believe they are well on track to finish the woodland by the end of January.


Project leader Hannah Woodhouse said: ‘It was heart-warming to see such a great turnout of people giving up their spare time to help us.

‘People feel passionately about trees, and many of our volunteer planters and their families have known this landscape for decades, so it has a very special place in their hearts.

‘We’ve still got quite a long way to go, with around 10,000 more saplings to plant, but we’re hoping people continue to come forward during our other planting dates in winter and spring.

‘This is a wonderful opportunity to be physically involved in the creation of a beautiful landscape that will be part of the English countryside for centuries.’

One volunteer, David Archer, said he had enjoyed the project so much he could not wait to do more.

He said: ‘This project is fabulous, and the weekend has been a huge success – it was such a lovely team effort. Personally, I can’t wait to do more.’

Apart from the thousands of trees, volunteers will also sew millions of plant seeds from a variety of different species, in a bid to eventually turn the area into natural woodland.