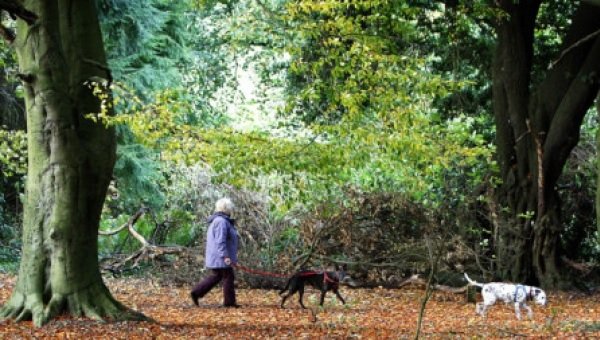 Thousands of trees are being felled after a deadly tree disease was uncovered in a woodland.

Workmen have started cutting down around 6,500 larch trees in Belvoir Park Forest, after an outbreak of phytophthora ramorum was uncovered there.

The disease is known in the USA as “sudden oak death”, although larch trees are also highly susceptible to the fungal-based sickness.

Infected trees develop “bleeding” lesions on their bark, and the victim tree can die as these spread.

The Department of Agriculture and Rural Development (DARD) said that as a result of this latest programme the forest landscape will be “changed significantly”.

DARD said in a statement: “The main area affected covers approximately one quarter of the forest.

“To minimise impact and where practicable, other tree species will not be felled as part of the harvesting operation.”

This felling operation comes in the wake of other large-scale operations to uproot ash saplings which have been infected with the lethal Ash Dieback Disease – something which is said to threaten the entire ash species on the island of Ireland.

The department said Belvoir forest is home to some of Ireland’s oldest trees.

A spokesperson for the Northern Ireland Environment Agency said: “These trees contain a wealth of biodiversity interest providing a historical and cultural link to our past.

“Some of these trees were present when Belfast was little more than a village. Many of these veteran trees are growing within the larch plantations that need to be felled.

“In many ways, this felling should ultimately benefit the veteran trees and we have worked closely with Forest Service to ensure that the felling of disease-affected trees is carried out as sympathetically as possible to minimise the potential threat to the veterans.”

Belvoir forest remains open, but visitors are advised to pay attention to signs on display, and to make sure their soles, bike tyres and other items are free of soil before they leave the forest.