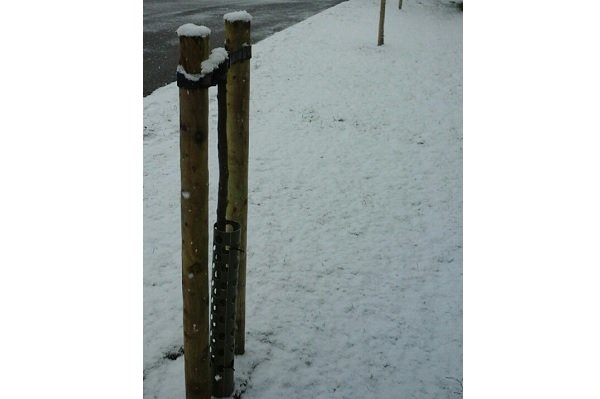 Residents and charity volunteers have been left “heartbroken” after more than 30 newly planted trees were vandalised at the weekend.

Vandals targeted the Havelock Street saplings in the evening of Friday, January 15, causing around £3,200 worth of damage.

The trees were planted in November by the Helensburgh Tree Conservation Trust (HTCT).

The financial cost of the damage is thought to be in the region of £3,000.

Residents and members of the charity, which has planted hundreds of trees in Helensburgh and Lomond in the last decade, were “devastated” by the vandalism.

Sandy Kerr, HTCT chairman, told the Advertiser: “We are a charity, we take it upon ourselves to assist the council by arranging to supply and plant trees.

“We have planted more than 1,000 trees in the 10 or so years we have been operating, and there have been very few incidents of vandalism.

“The board members, ordinary members and street residents are really quite devastated about the damage to the trees which were only planted in November.

“There is a cost of between £50-£100 per tree we plant – there is a substantial sum of money involved.

“While it may have been a prank or something for someone, it is verging on criminal damage. Raising money in this financial climate is hard and this is quite a major setback for us.”

Havelock Street resident Margaret Maccallum added that she and neighbours were “horrified” when they awoke to the destruction on Saturday.

She added: “Such an act of wanton vandalism is very hard to understand.

“For those of us who care about our town, perhaps thanks is due to the Helensburgh Tree Conservation Trust who work so hard with volunteers to make Helensburgh beautiful, replanting dead trees and in the case of Havelock Street planting over 30 crab apple trees last autumn.

“I am sure donations to the Conservation Trust will help towards replacements.”

Mr Kerr said there may be a silver lining to the heartless act, because the incident has sparked a great response from the local community, and there had been people interested in joining the trust after hearing of the news.

He said: “The residents are really annoyed. They are already raising money for replacements. We knew we would face problems, but we would just keep going.

“The reaction amongst our membership has been really good in light of this, and we have even had people ringing up to join. I’m heartbroken over what has happened. It’s unthinking, uncaring action.”

A spokesman for Helensburgh Police Office said enquiries were ongoing into the incident.

Last July, three 12ft to 14ft trees were vandalised, following another incident where trees in West Argyle Street and Charlotte Street were attacked.