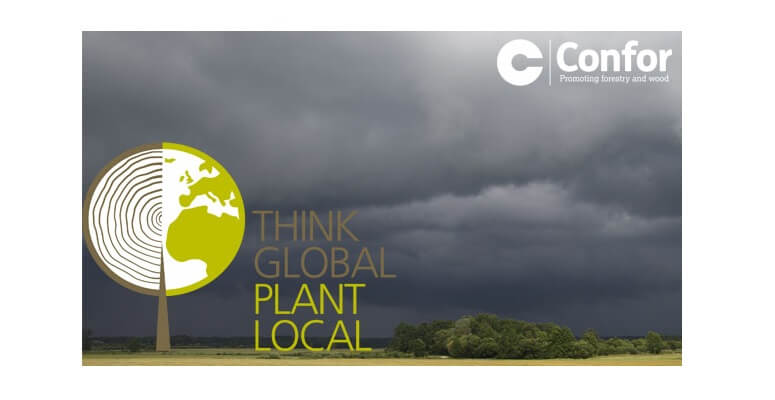 The UK Government has been urged to ‘Think Global, Plant Local’ to start tackling the damaging effects of climate change.

Independent advisers have told the Government that planting trees and building with wood is a “simple, low-cost option” to remove large amounts of carbon from the atmosphere. A message that is also highlighted by Sir David Attenborough in his latest TV series.

But, the UK Government is still way behind its own modest targets of planting 11 million trees in England in the five years to 2022.

Now Confor has laid down a challenge by setting ambitious new targets for the four UK nations. A total of 40,000 hectares (about 100,000 acres) of new planting every year by 2030.

“Climate change is the biggest challenge for us all and politicians must raise their game – not set a low bar and then fail to get over it,” said Stuart Goodall, Chief Executive of Confor.

“Tree planting rates in England and Wales are currently woeful. But, with political will, we can turn that around and ‘Think Global, Plant Local’ to help tackle the appalling impact of climate change.

“We are working closely with the UK Government to push up planting rates. But, I hope they will listen to Sir David Attenborough and really focus on the opportunity. In the new series Our Planet, he says we need to protect and manage ancient forests, but also create large new productive forests to tackle climate change and supply the wood we need for our low-carbon future.”

The UK currently has only 13% forest cover, compared to the EU average of around 37%. The UK is the second largest net importer of wood products, after China.

“We import 80% of our wood and we cannot continue to export our forest footprint to this extent,” said Mr Goodall.

“Planting more trees and using more home-grown timber can not only help meet our climate change targets, but also support economic growth and employment in the UK – and provide more places for wildlife to live and people to enjoy.”

“New planting in England and Wales in particular makes a mockery of what its independent adviser, the Committee on Climate Change, is saying,” said Mr Goodall.

“Politicians must start taking climate change seriously and all the evidence points to tree planting and wood use as a great way to make a significant, cost-effective impact.

“It’s the best form of carbon capture and storage that we have. Growing trees soak up atmospheric carbon, which can then be stored for a long period in wood products. As our climate gets warmer and extreme weather events increase, Governments really should be listening to respected voices like Sir David and not just paying lip service to climate change.

“We feel our targets are ambitious, but realistic – based on what industry believes can be delivered. Now it’s up to Government to step up to the mark.”