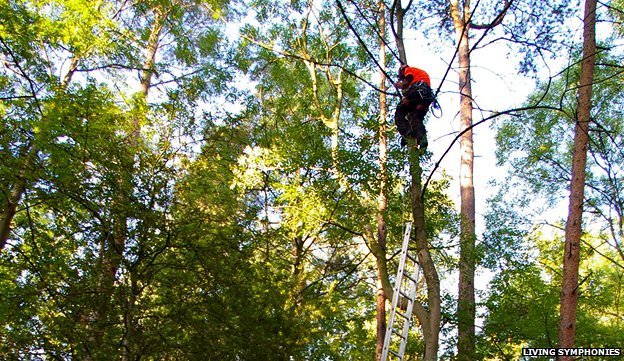 Listening to an open-air concert from a live orchestra in one of England’s beautiful forests will always connect you with Mother Nature – but thanks to musical science our forests are now set to become the actual performers, conducted by the flora and fauna in a series of “live” sound installations.

Living Symphonies is the culmination of a two-year project by composers Daniel Jones and James Bulley that aims to reach “thousands of people who might never otherwise be involved in the arts” by turning four forests across England into natural orchestras.

Working with ecologists from the Forestry Commission, the artists have made a detailed ecological survey to record the behaviours of plants and animals living within a 600 sq m and 25m high section of woodland.

The motifs, featuring more than 120 instruments, are then “plugged in” to the 3D survey of the forest and “played” by it responding in real-time to the time of day and the weather.

Or to put it another way, Mother Nature has been given a baton and she is conducting musical interpretations of the forest’s creatures and plant life as they interact with each other, resulting in a “live” and “ever-changing” performance in response to the atmosphere.

“We’re inspired by the natural processes in the world around us and to collaborate with nature,” said Bulley.

“Here the forest is both the performer and conductor and we can use this to create new forms of music while exploring the forest through sound.”

The £106,000 project, funded by Arts Council England, has been recognised by experts for its new approach to surveying habitats and music production.

Unlike Prokofiev’s Peter and the Wolf, which mimicked woodland animals, Living Symphonies aims to create an impressionist view of the species within the forest.

“For the first time we’re looking at the way the whole ecosystem works together, rather than surveying just a particular plant or species,” said Bulley.

“We have to have this detail to map the motifs of the symphony and create the interactions between them, this is really new ground for music.

“It’s a live, unfolding, composition and performance rather than a pre-recorded playback – a bit like having all the players in an orchestra having parts of a score, but they are improvising around it.

“They all have their core melodies, but somebody – in this case the forest responding to the weather and changes in the environment – is telling them where and when to play [in the forest] and in which style.”

It will take the composers three days to install the complicated 3D-sound design into Thetford Forest in Norfolk – the first location in England to host Living Symphonies.

The performance will be heard through more than 20 speakers, hidden between ground level and 25m high in the forest canopy, linked by more than 2km of cables and powered by a silent bio-generator formerly used at the London Olympics.

“We’ve been looking for really balanced eco-systems rather than commercial pine forests and we’re mostly interested in patches of ancient woodland.

“We never really know what the symphony will sound like as the performance will be ever changing, but as composers we’ve tied it together within the rules of a musical performance.

“The work is genuinely living, the composition will never be the same and will sound different in each of the forest we take it to due the variety in their ecosystems.

“It’s complicated working in this environment, it’s arduous when it rains and there’s nowhere to sit a lot of the time – but it’s brilliant.”