The Lonely Tree declared dead but hope grows for the future 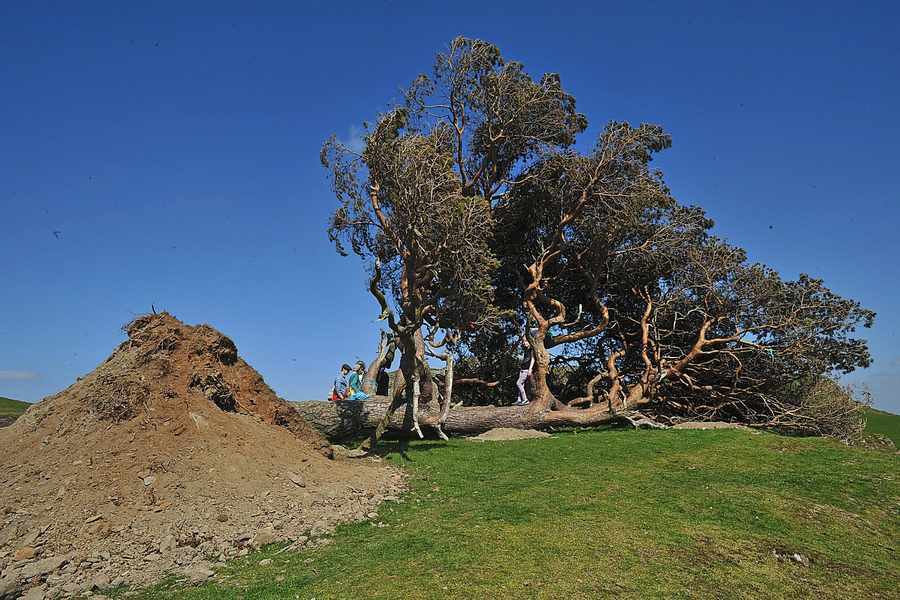 A landmark tree that has stood for hundreds of years has died – but its legacy could live on through saplings grown from its seeds.

The Lonely Tree at Llanfyllin (to be featured in next month’s Pro Arb magazine) was blown over in the hurricane-strength storms that swept Britain in February last year.

The town tried to save the tree, recovering its remaining roots with soil, but experts have now reached the conclusion that the tree can’t be saved and has died.

Llanfyllin’s county councillor Peter Lewis, whose family farm on the land where the tree stood, said it was a sad occasion.

“We were worried last year, but a third of it was still green,” he said.

“It’s been an iconic symbol for generations, but it’s finally succumbed to the weather and old age.”

Councillor Lewis said residents are now looking to the future and hope to grow a new landmark tree from the pine cones of the Lonely Tree.

He said: “We had a meeting on Tuesday where we talked about what we do now.

“We hope to find people who’ve had cones from the tree to see if we can grow new saplings and plant again from those.

“The Lonely Tree has done well for us, to win Welsh Tree of the Year last year. It’s really put Llanfyllin on the map. We want to preserve that history for future generations.”

The remains of the tree will stay on the site above the town. The majestic Scots pine had been a prominent landmark on the top of the hill for centuries.

It was where marriages had been proposed and ashes scattered, and it had become the much-loved emblem of the town.

Many people were distraught to hear the tree looked to have been lost. That sadness turned to hope earlier this year when it emerged that some of the tree’s roots remained intact and there was chance of survival if those roots could be protected.

A campaign was launched to save it and local people and firms volunteered equipment and time to cover its remaining roots with soil in the hope that the tree would survive.

An internet campaign was also launched to help pay for the work and hundreds of pounds was donated from around the world, many donations coming from ex-pats of Mid Wales who wanted to do their bit to save the landmark.

The tree also came 10th in the European Tree of the Year competition last year with 1,548 votes and was shortlisted in the National Trust’s Top 10 Special Places.

This Easter scores of people climbed the hill above the Welsh town to enjoy a Good Friday walk with the Llanfyllin Community Church. And in the afternoon there was a walk to celebrate a new book written about the landmark. Entitled Lonely Tree: My Story, it is full of photographs and people’smemories and thoughts.

Put together by Pauline Page-Jones, Richard Kretchmer and David Goodman, members of Llanfyllin Civic Society, the book celebrates the tree’s history and legend.

One contributor, Emma Allen, from Llanfyllin, writes: “The Lonely Tree for me represents a freedom of fresh air, peacefulness and, on a clear day, a view to cry for.”