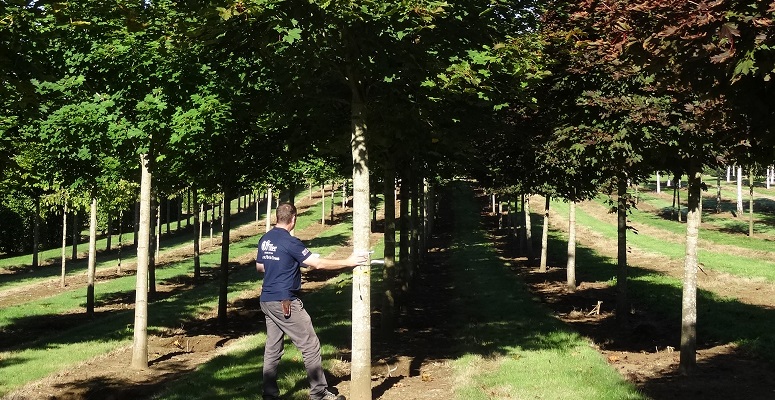 The historic approach towards planting avenues of single species trees is gradually shifting with more mixed avenues being specified. Jamie Gormley, Account Manager at Hillier Trees, debates the rationale for either approach.

The avenue as a means to enhance an approach and train the eye towards a specific feature has been used for thousands of years. An avenue of sphinxes leading to the pharaoh Hatshepsut’s tomb was built back in 1400 BC and remains there to this day.

“When it comes to tree planting projects, we often get requests still for grand avenues,” says Jamie. “Common practice used to be to plant two rows of a single tree species either side of the avenue, running down its full length creating a grand, uniformed entrance. This was used extensively in Victorian times to enhance the approach to manor homes and stately mansions. But this trend is beginning to change.”

Historically, species for avenues were selected for their grand size, impressive forms and the speed of their growth to reach imposing heights; Trees such as Fagus, Tilia, Poplar and Aesculus were most commonly used. In recent years, the unfortunate ease with which some tree diseases have been able to spread have dramatically affected many avenues – in particular those planted with elm, ash, horse chestnut, and now even our mighty English oak.

Many tree specifiers, given the understanding of the very real risks of future tree diseases spreading, are now opting to plant a diversity of species. An increasing number of requests are made for different species included in a single avenue.

“There are definitely benefits to a mixed avenue approach,” comments Jamie. “This approach can help ensure that when tree diseases inevitably reach our shores and affect a specific species, it will only impair small controlled areas within a landscape.”

There are additional reasons for choosing mixed avenue planting alongside potential disease control. “This approach has provided an opportunity to create flourishing, evolving landscapes of contrasting tree colour variations that change over the seasons,” says Jamie. “This leads to areas with a structure of assorted heights and sizes. This is visually appealing and a biodiverse solution to tree disease risk. Trees with contrasting amenity values can also be incorporated, supporting a wider range of wildlife.”

One such project Hillier Trees has been recently involved in was the pilot Avenues project in Glasgow City Centre in 2018. This project, for the development of Sauchiehall Avenue, was the first within a planned £115 million ‘Avenues’ transformation programme by Glasgow City Council.

There is, however, still an argument to be made for a single species approach. “It was Edward Scanlon who surmised that trees are similar to urban crops,” says Jamie. “They each have their own symbiotic relationship with a specific mycorihzza, they each have different soil preferences with growth rates which would make it problematic incorporating many species in one urban location. Similar to corn or wheat being mono-planted in a field and not all grown together, so should our urban trees follow the same practice.”

After having to replace hundreds of elms due to their devastation from Dutch elm disease, Edward clearly understood the risks of monoculture. In order to remain bio-diverse whilst single species planting, he planted each street in Cleveland, U.S.A, with a different tree species. “This created beautiful avenues of enhanced visual quality that were unique and different to one another, whilst remaining true to a street-by-street, field crop basis,” adds Jamie. “This also ensured it was easy to recognise your location within a city simply by looking at the tree stocks.”

There remain benefits to both a mixed or single species approach, which are site specific and also based on personal opinion and preferences. For any technical assistance with avenue planting, the team at Hillier Trees will be happy to help as well as assisting with all forms of biosecurity, biodiversity and tree recommendations.