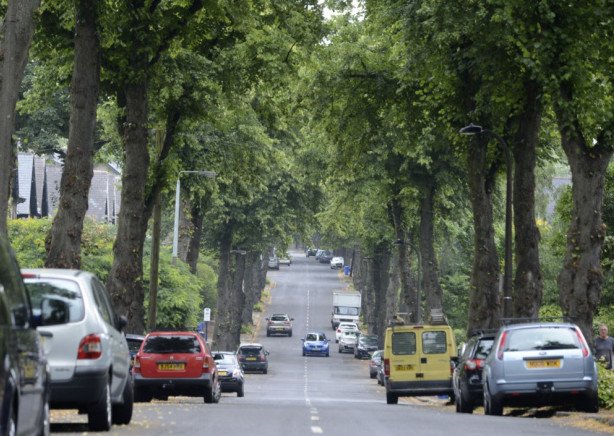 Trees are the jewel in the crown of Sheffield’s green city status – and nothing sparks fierce debate more than their removal. The issue flared up again this week as residents highlighted their battle to save 12 trees on Rustlings Road, alongside picturesque Endcliffe Park, from being chopped down.

They believe the trees add so much value, by boosting wildlife, air quality, flood prevention and the area’s appearance, that they should be retained at all costs.

Sheffield Council contractor Amey says they must be felled because they have damaged the pavement and pledged they will be replaced. Objector Vinnie Traynor said the decision was ‘made for the wellbeing of pavement and not people’.

The two sides of this debate have been fought before. Angry residents campaigned to save a historic oak tree in Stocksbridge after council bosses said it was badly diseased and presented a risk to the public.
Jeremy Willis, operations manager for grounds and arboriculture at Amey, said: “That tree is a really good example because it looked absolutely perfect – but the truth was it could have fallen at any time.”

Tree teams had spotted the tree’s disease, which is called ‘chicken of the woods’ and weakens wood, as they inspected it during the slim period when the fungus fruit is visible.

The 270-year-old tree was then resistographed to measure its decay.

Streets Ahead insists that it removes trees as a last resort…although residents have a different view.

They believe it is easier, quicker and cheaper for trees to be chopped down by Streets Ahead than retained and fear it will damage their leafy communities.

“People do get very passionate about trees, so we want to listen to their concerns but obviously we’ve got the safety of the highway and health of the trees to consider,” said Mr Willis. “The team that work for us are passionate about trees and they know so much. They will fight hard to retain trees wherever they can.

“Sheffield is the greenest city in Europe and we don’t want to lose that.”

Streets Ahead took The Star out to see some of its work on trees – which also includes pruning overhanging branches – during the planting season.

On Greenhill Main Road, near Greenhill Parkway, 32 new trees were being carefully planted to improve the area. And down the road at Ansell Way workers were suspended high in the branches of another tree to cut them back – away from the mass of wires stretching between homes.

Like most trees in Sheffield, these specimens were planted in Victorian times, before the overhead wires were installed.

That, and a lack of investment in roads over many decades, are said to be factors in why trees are now being removed.

The condition of all the 36,000 trees on Sheffield highways was assessed in 2012 and trees creating the greatest hazards were removed first. Now those found to be damaging roads or footways will go as Streets Ahead’s work to resurface streets and upgrade lights makes its way across the city zone by zone.

Data obtained by The Star last year showed 576 healthy trees were felled in two years because they were causing ‘irreparable damage or obstruction’ to roads or structures.

Mr Willis said it was roots from older trees that were breaking up footways and pushing kerbs out of line, and sometimes trees could have structural problems.

Last year a 20-year-old woman escaped major injury as she was hit by a rotten tree that smashed on to Ecclesall Road – although it was on private land rather than being a council-maintained tree.

Mr Willis added: “She was fortunate it was only a glancing blow. We’ve got a lot of trees that are causing massive damage to footpaths and carriageways.

“The highway has to meet highways standards according to the Highways Act and so for us to get them up to that standard, there are trees causing that damage which need to be removed.

“There is a reason there. We can’t not do anything about it – we have a legal responsibility.”

The trees that are being replanted are a mixture of 32 species which Amey says are more suitable for roads and will have a wider age range than Sheffield’s current stock.

Some like field maple and ornamental pear trees are used for narrow verges and restricted areas, others for grass verges and others such as elms or Persian ironwoods for high profile locations such as the city centre.

Residents have been sceptical about whether the replacement of trees one-for-one actually happens – as they are not always put back in the same spot.

In Stocksbridge the oak will be replaced at Stocksbridge Junior School rather than on Oak Avenue as the roads are too narrow.

That tree, as well as one removed from Carterknowle Road because it was causing damage to pavements, have been made into decorative benches so they will live on in the community.

Mr Willis insisted trees were replaced ‘in the same position or as near as possible’ and problems were being tackled now to stop future problems.

He added: “The majority of Sheffield’s trees were planted in Victori an times andwe’ve built a city around our trees. The replacement trees for those we remove are more suitable for the highway. They’ve been tried and tested and we have first pick from across the country.

“It’s fair to say the life expectancy of a street tree is shorter than one which is standing in a woodland environment. It’s a terrible environment for them really.

“We need to get a very varied mix of young and old trees so in future if a tree does have to be removed because it is falling apart it won’t impact the street as much because there are younger trees coming up.”

With much of the city still awaiting highways work, the controversy over trees is unlikely to subside for some time, particularly as the public is not consulted but only informed of their removal.

Streets Ahead says that it has many calls from residents who have problems with trees.

“We do get a lot of calls about trees. We deal with probably a couple of hundred every month,” said Mr Willis. “That’s a mixture of people saying there is a problem with a tree, it’s blocking light or dropping leaves.”

Published by The Star