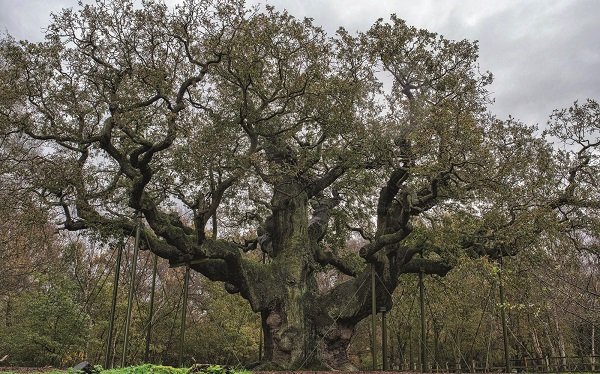 Each month we feature an ancient British tree.  This month the Ancient Tree Forum introduces us to the Major Oak

Perhaps the most famous tree in the UK, the Major Oak has inspired countless tales and probably an even greater number of children to dress up as Robin Hood. The tree is one of around 1,000 ancient oaks found in Nottinghamshire County Council’s Sherwood Forest Country Park near the village of Edwinstowe. The pedunculate oak is estimated to be anything between 800 and 1,00 0 years old and has a trunk circumference of 10 metres.

The tree’s most famous association is with Robin Hood. Folklore suggests his band of merr y men would have used the tree’s hollow trunk as a hideout. Thousands of visitors from across the globe visit Sherwood Forest every year to see the majestic tree, which in a good year can produce as many as 150,0 00 acorns. The earliest recorded name for this remarkable oak, dating back to the mid 18th century, was the Cockpen Tree. The hollow interior is said to have been used to pen cockerels ready to be used in the now illegal sport of cock fighting. Later it was known as the Queen Oak. The tree became better known as The Major’s Oak af ter it was de scribed in 1790 by a local historian, Major Hayman Rooke.

In Edwardian times, metal chains were used to support its weighty branches and lead sheet attached to protect the trunk. In the late seventies, these measures were replaced by large wooden struts, supporting the heaviest branches. Today, slender steel poles prop the sprawling limbs of this forest giant. Tree surgeons check the oak periodically and carry out remedial work as needed. The tree’s most recent accolade was being crowned England’s Tree of the Year by the Woodland Trust in autumn 2014 having received the most public votes from a shortlist of 10. It went on to represent England against 13 other trees from the rest of Europe, coming 6th in the European Tree of the Year contest this spring.

The Ancient Tree Forum champions the biological, cultural and heritage value of Britain’s ancient and veteran trees and it gives advice on their management at www.ancient-tree-forum.org.uk.