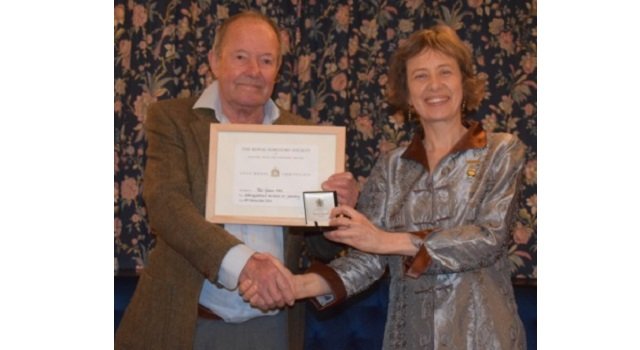 Ted Green MBE, one of the country’s leading authorities on Ancient Trees, woodland fungi, forest soils and associated micro-organisms, has received the Royal Forestry Society’s (RFS) Gold Medal for Distinguished Services to Forestry from RFS President Sophie Churchill OBE at a meeting of the Southern Division.

Ted has been described as: ” a good ambassador for our multi-faceted profession.”

and as: “A conservationist with a love of forestry. To say that he has a foot in both camps would suggest more of a divide than actually exists. A few years ago there undoubtedly was a gap. Ted’s work has been instrumental in bridging that.”

Details of Ted’s Gold Award are available here. Details of other awards presented by the RFS and its Divisions can be found here