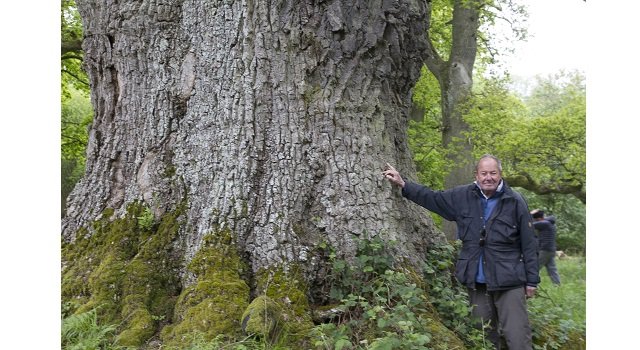 Ted Green, one of the country’s leading authorities on Ancient Trees, woodland fungi, forest soils and associated micro-organisms is to be awarded the Royal Forestry Society’s (RFS) Gold Medal for Distinguished Services to Forestry.

He is credited with doing much to bridge any gaps between forestry and conservation and has influenced the debate in forestry and arboriculture for more than 50 years.

Over his long career, Ted has put forward theories on the importance of managing the whole ecosystem. He was the founder member of the Ancient Tree Forum in 1993 and is an MBE.

In proposing Ted for the award, Derick Stickler, Chairman RFS Southern Division, described him as ” a good ambassador for our multi-faceted profession.”

And added: “He speaks with passion and enthusiasm, and presents his audience with ideas that are often treated with scepticism at first, but which are now part of mainstream debate in forestry and arboriculture circles.”

Ted had met and admired  foresters as a young boy but his professional life began when he was employed as a laboratory technician at Silwood Park, a part of Imperial College. There he had access to the Ancient Woodlands on the nearby Windsor Estate where he could pursue his interest in conservation, accumulating vast knowledge by observation, experiment and plant trialling.

Following employment at Silwood Park and English Nature, Ted became Conservation Adviser at Windsor in 1985, a position that he holds today.

Ted  joined the RFS after Jack Taylor, then head forester at Windsor,  invited him to a meeting and says: “Coming from a background of listening to the ‘back and frontal stabbing’ that took place with academics, imagine the pleasure and surprise at hearing the good natured discussions, the willingness to want to share experiences, and to help.”

Ted remains a loyal supporter of the Southern Division and a long serving committee member. Discussions at field meetings are often enlivened by his presence and he has played a major part in influencing land owners to re- appraise the way they manage their woods and to adopt a more holistic style.

A fellow Southern Division’s committee member says: “Ted Green is a conservationist with a love of forestry. To say that he has a foot in both camps would suggest more of a divide than actually exists. A few years ago there undoubtedly was a gap. Ted’s work has been instrumental in bridging that.”

Derek Stickler worked with Ted Green on the Windsor Estate for more than 20 years and says: “Ted understands that the forest is required to produce timber including from ecologically sensitive sites.  It was an excellent example of information exchange between forester and conservationist.

“Ted is not a silviculturist and conservation was my Achilles Heel. He introduced the practice of ‘haloing’ around Ancient Trees; the name has stuck and is used universally in the context of managing these special trees…Through Ted’s work with the Windsor Estate it could be demonstrated to practicing forestry professionals, conservationists and students that silviculture and conservation are not mutually exclusive. Education is indeed the Society’s main objective and Ted’s work is very much in tune.”

Gold Medal Awards are a rare achievement. The last person to be awarded one was Bede Howell in 2012.

More details can be found at http://www.rfs.org.uk/awards/rfs-gold-medal-award/