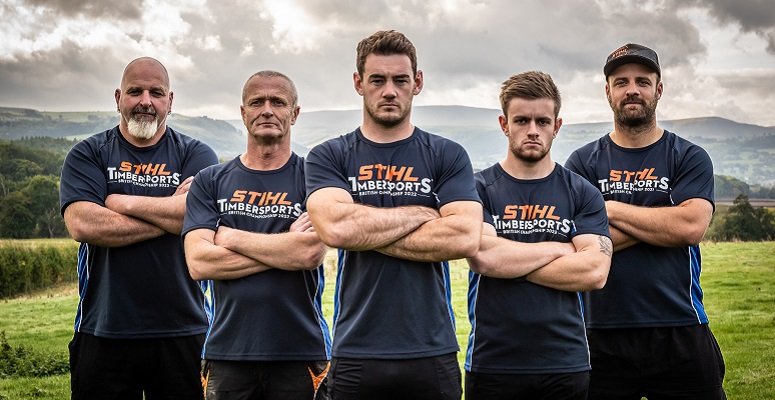 Team GB are heading to Gothenburg, Sweden, to put their axe and saw skills to the ultimate test in The Original Extreme Sport. With the return of the STIHL TIMBERSPORTS® Team World Championship after a three-year break, they will be taking on the world’s best lumberjack athletes in the Partille Arena on the 28 October 2022.

Spectators will witness the very best in elite logger sports, with more than 120 athletes from 20 countries competing for both individual and team glory across two days of adrenaline-fuelled action. The British TIMBERSPORTS® team will be joining logger sports athletes from all over the globe, including Australia, New Zealand, United States, Canada and Europe.

Team GB is made up of Glen Penlington, John Lewis, Tom Redmond, Terry Hough, and Graham Turner, who all proved at this year’s British Championship that they are the best athletes in Britain. Penlington took the top spot and was crowned the British Champion, with Turner and Lewis taking 2nd and 3rd on the podium respectively. The current British Rookie Champion, Jack Morris, will also be taking his place as part of the team.

Each national team will compete against each other in a knockout system, where four athletes will complete the Stock Saw, Underhand Chop, Single Buck and Standing Block Chop disciplines in a relay race.

Simon Hewitt, Head of Marketing at STIHL GB, said: “The STIHL TIMBERSPORTS® World Championship is one of the most exciting live sports events of the year and the team are ready to represent Great Britain on the biggest stage. It’s sure to be edge-of-your-seat action from start to finish!”

The Individual World Championship takes place the following night on 29 October. High octane sports fans can watch both competitions via a live broadcast across the STIHL TIMBERSPORTS® Facebook, YouTube and Twitch channels, starting at 18:00 BST each day.

To find out more about the STIHL TIMBERSPORTS® Series in Great Britain please visit https://blog.stihl.co.uk/timbersports/

Stock Saw – athletes race to cut a timber “cookie” with a chainsaw from a horizontally set log. The cookie must be complete and within a defined thickness