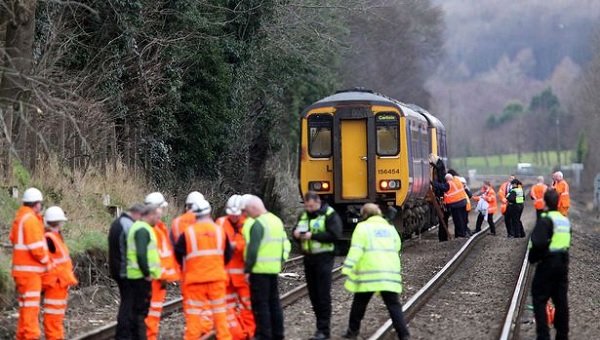 A council and a tree surgeon have been sentenced for safety failings after a worker was injured when trees he had been felling landed on a railway line and was hit by a train.

Peter Wood, 52, of Grange Villa, Durham, was carrying out tree work for Mark Anthony Connelly at Boat House Crossing near Ryton, next to the Newcastle to Carlisle railway line, on 11 January 2012.

Newcastle Crown Court heard today (3 July) that Mr Connelly (trading as Practical Conservation Management) was contracted by Gateshead Metropolitan Borough Council to  remove two poplar trees as they were in danger of falling onto the track.

During the felling, one of the trees twisted and fell onto the railway line uprooting another tree on its way. Mr Connelly and Mr Wood tried to cut the tree away from the track, but while doing so failed to hear an oncoming Newcastle to Carlisle train. Luckily the train was able to brake but couldn’t avoid hitting the tree, injuring Mr Wood.

He sustained a fractured right ankle, a cut to the back of the head and bruising on his left arm, left thigh and right forearm.

The court was told the cost to repair the train by Northern Rail was more than £97,000. A further £7,000 was incurred by Network Rail on callout, materials, machinery hire and delays to services. Network Rail had not been told about the felling operation near its line.

An investigation by the Health and Safety Executive (HSE) found that Gateshead Council failed to take reasonable steps to ensure that Mr Connelly was competent to carry out work on large trees, such as checking if he had the relevant qualifications. Had it done so, it would have found out Mr Connelly was not, in fact, so qualified.

HSE also found Mr Connelly failed to put safety measures in place that would have prevented the tree from falling in the direction of the line.

Gateshead Metropolitan Borough Council, of Civic Centre, Regent Terrace, Gateshead, was fined £40,000 and ordered to pay £5,854 in costs after pleading guilty to breaching Section 3(1) of the Health and Safety at Work etc Act 1974.

Mark Anthony Connelly, 42, of Calders Crescent, Fatfield, Washington, was sentenced to 150 hours of unpaid work and ordered to pay £5,854 in costs after pleading guilty to breaching the same Act.

“Mr Wood’s painful injury and Northern Rail’s unexpected bill for almost £100,000 could all have been avoided. Mr Connelly should have been able to determine that the large poplar trees represented a challenge which he was not really qualified to deal with safely and that the site presented factors which meant that special measures should have been taken.

“The decision to fell a mature poplar tree on a steep slope within falling distance of an active railway line without informing Network Rail and not using a precautionary winch was indicative of Mr Connelly’s poor planning.   “It is vital that as part of the risk assessment that surrounding hazards, such as railway lines or overhead power lines are identified, and controls put in place to reduce the risk of the trees being felled towards them.”

For more information about working safely in the forestry and arboriculture industries, visit http://www.hse.gov.uk/treework/index.htm