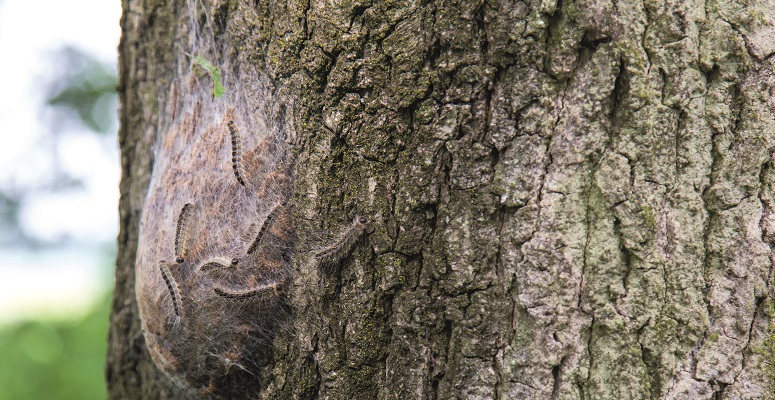 With reports of Oak Processionary Moth on the rise, Pro Landscaper finds out exactly what the tree pest is and how the industry is responding to the threat of it spreading across the UK

A few years ago, the only place oak processionary moth (OPM) could be found in the UK was London. This year, though, the unusual tree pest is being discovered as far afield as Cardiff and Sheffield. Wolverhampton-based Boningale Nurseries is so concerned about it spreading that it has ceased importing oak trees, and the RHS banned the species from being brought onto the show ground at Chelsea this year.

If this isn’t enough to raise alarm bells, Defra implementing tighter restrictions on oak tree imports might be. The department is eager for the UK to remain a protected zone, and is cracking down on oak trees being brought into the country from other areas of Europe.

It’s not just oak trees which are under threat from the pest, either. The caterpillars are harmful to human health – the more a person is exposed, the worse the symptoms. With OPM becoming a growing cause for concern, then, what exactly is it? Why is it increasingly hitting the headlines? And how is the industry reacting?

Moving across the tree in a nose to tail procession, it’s easy to see how these nonnative caterpillars got their name. As moths, they lay their eggs towards the end of the summer months, generally choosing larger oak trees. Once hatched in the spring, the caterpillars move in their distinctive pattern, creating a nest on the tree and weakening it in their wake.

“OPM is a defoliator,” says Dr Glynn Percival, plant physiologist and technical support at Bartlett Tree Research. “So, over time it will repeatedly defoliate the oak tree, causing it to slide into a spiral of decline. Most trees can
tolerate one or two defoliations without any major impact on longevity, but the third or fourth defoliation starts to affect the tree.”

It also causes the oak tree to be more susceptible to other pests and diseases. Glynn says the main concern, though, is the health hazard. “White hairs on the caterpillars have sensitive toxins. The first time you come into
contact with it, you might develop a mild rash, but by the fifth or sixth exposure you could end up in A&E. Each time you come into contact with it, the severity increases.

“The critical period is throughout April to late May. After that, once the caterpillars have gone through their final stage of turning to moths, they’re harmless. The only other concern is the nests, which are full of hairs. They eventually deteriorate, but the hairs slowly start to fall out of the nest and get blown around.”

The good news is that OPM tends to spread slowly – 2 to 5 miles a year, according to Glynn. The bad news is that this year it appears to be spreading at an alarming rate. “It was mainly restricted to the London area, but it has exploded this year.”

In July, oak processionary moth was discovered near Cardiff Central station on trees which had been imported from an area of Europe where OPM is widespread. The University of Sheffield also issued a press release confirming it had found the pest on one of three oak trees that it later discovered had been imported from Holland, rather than being UK stock as it had first believed. All three trees are being destroyed and replaced later in the year, but concerns have been raised over how infested stock is spreading across the country.

“We suspect a nursery has brought infected oak trees from abroad and distributed them throughout the UK,” says Glynn. “It’s the only logical explanation for it spreading to all these different places within such a short space of time.”

Eager to avoid adding to the problem, Boningale has taken drastic action, ceasing the importation of oak trees. It will now only source UK stock which has been examined by UK inspectors during the last growing season. Managing director, Tim Edwards, came close to implementing similar measures last year, when Defra introduced new legislation which prevented oak trees (with a girth of 8cm or more at 1.2cm above the root collar) from being imported into the UK’s OPM protected zones unless certain conditions were met – predominantly, that the oak tree was grown in an OPM-free area and had undergone rigorous inspections.

There was a problem, though, says Tim. Holland’s competent authority Naktuinbouw claimed it had been carrying out inspections in line with the UK’s new measures for the last two years, and therefore, Dutch exports were legitimate. Tim questioned this, as did Defra, but after Naktuinbouw sent details of the inspections, Tim says, that Defra “reluctantly conceded that inspections in Holland were of an adequate standard”. Boningale remained cautious about importing oaks, though, asking Dutch growers to confirm in writing that the plants they were exporting had been grown and inspected within the Dutch inspection regime. “I thought that was the most responsible action to take and would have eliminated any problem I could foresee.”

As reports of interceptions continued to increase, however, Tim decided it was time to stop importing oak trees, and Defra announced it would bring in even tighter regulations to protect England from OPM. Oak trees will only be able to be imported from OPM-free countries, from designated pest-free areas, and must have been grown ‘under complete physical protection for their lifetime’.

The demand for oak trees in the UK outweighs the production on home soil, though. We need to start producing more oaks, says Tim, rather than relying on European imports, despite this having a possible detriment on business. “If I have an order of oaks, I can either choose a UK produced oak to satisfy the order or decline that order if I can’t. It’s a very difficult business decision. But we have to ask ourselves, what’s more important? The short-term gain of those few oaks or the long-term biosecurity of the country. For me, and for Boningale, that’s a really easy decision. I’m going to forego the sale of those oaks and instead do my bit for the biosecurity of the country and behave as a professional operator.”

There also needs to be a penalty in place for nurseries which distribute infected stock, say Glynn. “There should be legal ramifications. If I were a landscaper or garden designer, I would stipulate to nurseries that they need to guarantee I’m receiving OPM-free trees and ask for some form of certification.”

The eggs are camouflaged in with the bark, making them difficult to spot at a quick glance, so rigorous inspections need to be carried out. “One of the advantages of the nurseries is that they can use quite a diverse array of insecticides, so they can clean up their trees. Once those trees leave the nursery, though, the choice of insecticides is dramatically reduced.”

If OPM is discovered once the trees have left the nursery, then an approved contractor should be sought to remove the nest. All of the kit used throughout the removal and treatment – ropes, harnesses, boots, trousers, etc – then has to be incinerated as washing the equipment will not remove the toxic hairs.

Oak processionary moth could therefore be an extremely costly tree pest for the UK if it continues to spread. Glynn is concerned that the industry’s reaction to it may be too little, too late. “It reacted incredibly robustly to Xylella, but for some reason OPM did not fall into the same category. We don’t have Xylella in this country, but everyone is aware of it.

“OPM is just the tip of the iceberg, too. There are other pests and diseases out there which are just as nasty. Nurseries should quarantine their trees for a year. They’d be able to spot an outbreak and either cull or treat the trees to eradicate a problem.”

Although Tim says the UK is ahead of most of its European competitors in terms of keeping pests and diseases out the country, he’s also concerned that if the UK continues to import oak trees, OPM could become endemic. As he poignantly puts it: “Oaks are under threat from a number of problems already, it’ll be criminal for us to allow another to get a foothold.”