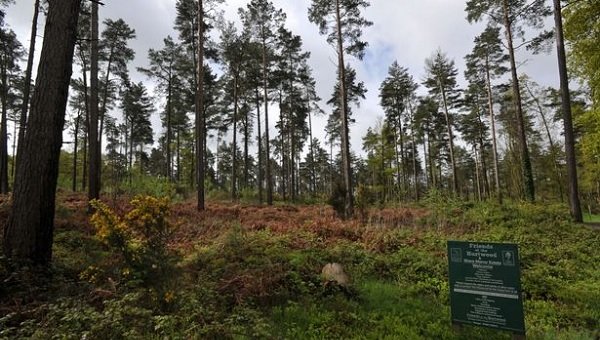 Public support has grown for a campaign to prevent the sale of part of the Hurtwood estate to private owners, amid fears it could end up being used for commercial ventures, such as oil and gas exploration.

Villagers distributed more than 200 leaflets to cyclists in Peaslake and Holmbury at the beginning of the month, and on Monday’s bank holiday, alerting them to the plans to sell 650 acres, as it is believed cyclists and horse riders could be among those affected.

Campaigners want Surrey County Council to step in and purchase the land.

Owner and lord of Shere Manor, Handa Bray, said the land earmarked for sale, which is from Randor Road to Winterfold, is being sold off in order to pay an inheritance tax bill, but she said it will not affect the public right of access, which is protected by law.

However, it is feared that while access by foot on the paths may be maintained by law, mountain bikers and horse riders will not have the guaranteed access they currently enjoy.

“The response was fantastic, with cyclists all expressing utter horror at what could happen to the part of the Hurtwood which is up for sale,” said Chloe de Champneys, who helped distribute the letters to cyclists.

“They all undertook to email everyone they could and copy and pass on copies of the leaflet.

“I don’t know that anyone has come forward yet with an interest in purchasing the site, but it’s very early days.

“We need to generate a lot more publicity to keep the momentum going and get enough people and organisations interested in putting together a plan to buy the land.

“At present, there isn’t even an official organisation set up. All we are is a loose group of volunteers who are doing what we can to publicise what is happening.

“What would be wonderful is if some prominent individual would come forward to head a ‘save the Hurtwood’ campaign. Maybe someone like Eric Clapton, who lives on the edge of the Hurtwood, or John Gordon Sinclair the actor and author who lives locally and opened the Peaslake Village fair a year or two ago. They needn’t do any work, just put their names to it

“Ordinary volunteers will do the door-knocking.”

It has been claimed that a private buyer is highly unlikely to purchase a site of such a size and leave it in its present state.

“There is a danger that it will be used for money-making, such as film location work, private shooting parties or for oil and shale gas exploration, given the substantial deposits of both discovered nearby,” the leaflet read.

“The only way of safeguarding the Hurtwood for the public good, as well as protecting the many businesses who depend on the high volume of visitors, is for the land in question to be bought by Surrey County Council, perhaps as part of a consortium of local authorities representing South East England and maybe with input from charities supporting the preservation of open spaces.”