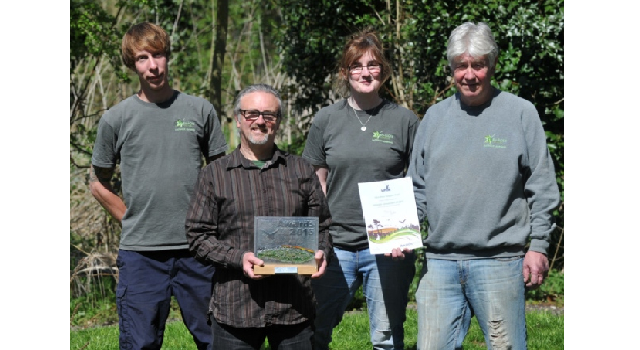 Eden-Rose Coppice Trust, a charity that restores neglected, rubbish strewn, town centre woodlands, transforming them into beautiful havens for people with cancer is the lucky recipient of the Woodland Trust’s golden ticket.

For this they have received the Woodland Trust’s one-millionth tree in the free tree packs that have been distributed nationwide to community groups, schools and clubs.

It will be planted in Brickmakers’ Wood, Ipswich, a new retreat the charity is currently working on.

The one-millionth tree is part of the Woodland Trusts First World War Centenary Woods Project launched last year to mark 100 years since the outbreak of the First World War.

First World War project manager Philippa Borrill said: “While the golden ticket is a fun idea it is also a symbolic mark in the commemorations as one million people lost their lives in the First World War.

“The Woodland trust are delighted that Eden-Rose Coppice Trust have been selected to be custodians of the special centenary tree.

“We are so excited about the project, the Eden-Rose Coppice Trust is a very good fit for the work of the Woodland Trust and we are blown over by their project and future ambition.

“The fact that the site of the new wood had connections with the world wars is the icing on the cake.”
It is believed the woodland was owned and operated by Ransomes Sims and Jefferies during the First World War.

The charity itself was started in Sudbury where it has gone on to win awards for the work it does, much of which involves disabled youngsters who gain essential life skills.

“We are absolutely thrilled to have been chosen to be custodian of this special tree,” said Joanna Brooks, manager at their new site in Ipswich.

“We took over Brickmakers’ Wood in Ipswich to alleviate demand for our services and have started the transformation with the help of Ridgeons who have donated tools and the University Campus Suffolk students and staff who continue to volunteer their time.

“It is an absolute honour to be able to plant and care for this extraordinary tree. It has been quite heartbreaking clearing all the rubbish, glass bottles, human waste, needles and other drug paraphernalia from the woodland.

“Someone even tried to set fire to one of our unique ancient Elm trees and we have still yet to raise the last bit of money needed to secure the site.

“The planting of the tree will commemorate those that lost their lives in the first world war and mark the beginning of a new venture bringing some happiness and sanguinity to people who are living with a life limiting illness such as cancer, many who may have fought in the second world war.”

There will be a special planting ceremony on Tuesday from 11.30am where they will plant the centenary tree and a wildlife-loving hedge around the site with the rest of the trees donated by The Woodland Trust.

This will prevent further break-ins and benefit and encourage local wildlife.

To donate to the project or for more information visit www.withnature.org/.