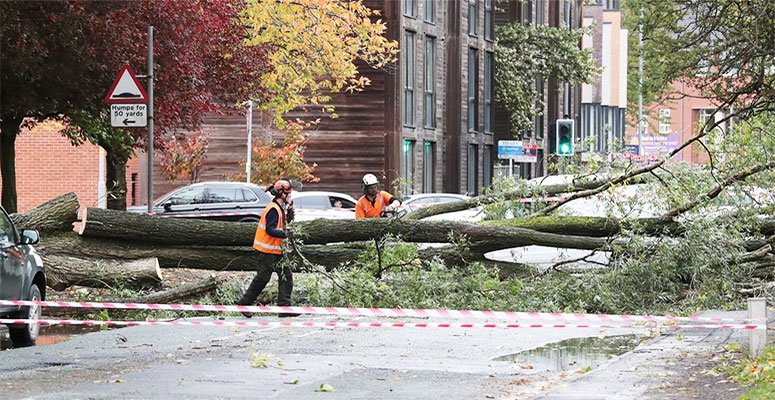 Gusts of 45mph have been recorded today, while winds could reach 60mph around exposed hills, with the warning in place until midnight.

In Hulme a large tree blocked the road when it came down on Moss Lane East close to the junction of Hulme High Street and the library and leisure centre. It was reported to the fire service at about 1.30pm and the incident was passed on to Manchester council. The road was closed while workmen cleared the tree using chainsaws.

A city council spokesman said: “Our team are on site dealing with the fallen tree and it should be cleared shortly.”

In Denton a Ford Fiesta was damaged when a branch fell onto its bonnet on Victoria Street. And in Romiley in Stockport a large tree bough came down in Marsden Road. Pictures from the scene appear to show it having narrowly avoided a Mercedes van and Citroen 108 parked nearby.

A Stockport council spokeswoman said the authority was looking into the incident.

Elsewhere trees also came down on Cornishway in Wythenshawe, and on Lower Strines Road in Marple. In a post on Facebook Greater Manchester Police said: “Blustery wind and rain affecting most of our region today and we are getting multiple calls about fallen trees and RTCs.

“Met Office have issued a yellow alert for our region due to #stormcallum. Take extra care on the roads and report any debris to Highways team at your local council.”

A spokesman for Greater Manchester Fire and Rescue said they were called to Wall Street in Tyldesley, Wigan, at 3.16pm to reports a tree had fallen into a car.

They said the service has also been made aware of other incidents, but has not needed to attend. And there’s going to be no let up from the wind and rain tomorrow.

Saturday is also set to be wet and windy, but the rain showers are likely to clear later on in the day. But temperatures will stay unseasonably warm, with highs of around 21C forecast. The good news is by Sunday the stormy weather will have cleared, but forecasters are now warning the remnants of another volatile weather system could arrive close to the UK by Tuesday.

Hot on the heels of Storm Callum is ex-hurricane Michael, which has been described as the most powerful storm to hit the USA in decades.